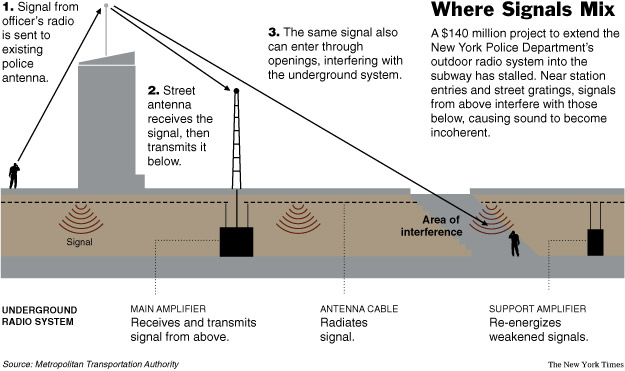 That’s The Times’ fancy way of showing us why radio reception isn’t too good underground.

The news out of the subways last week featured yet another setback for adequate underground communications. According to news reports, a $140-million communication system for the New York City police that is supposed to work underground does not. This comes as no surprise to anyone who has ever tried to use a cell phone in the subway.

The Times reported on the problem last week:

Last October, after spending $140 million, the authority completed the installation of the system citywide.

But it has not been turned on.

That is because the Police Department refuses to use it, saying the new system is hobbled by widespread interference that garbles communication and creates areas where radios cannot receive properly. “What you get is distorted audio,” said Joseph Yurman, a communications engineer for New York City Transit. “You can hear it, but it sounds as if you’re talking through a glass of water.”

Fixing the problem may require replacing new equipment with more advanced components at a cost of up to $20 million more. If all goes well and disputes over which agency will pay for the changes can be resolved, the police say the full system could be turned on next year, some four years behind schedule.

According to engineers offering up an explanation for this interference, the problem basically arises from all of the metal found in our city streets. From ventilation grates to pipes and entrances, metal shields much of the subway, and the radio waves pick up interference as they pass underground. Furthermore, nearly 75 miles worth of cables installed for this project have eroded beyond use.

So once again another technological upgrade by the MTA faces cost overruns and and a delayed timeline. And the NYPD and Fire Department can’t agree on the safety of subways. It’s politics as usual for our underground transportation network.

Breaking News: The 2nd Ave. subway is so ‘boring’

cables shouldn’t erode in less than four years, that’s ridiculous, even I could probably make a better cable than that!

[…] woman is still on her cell phone. I guess Dattner thinks that the improbable cell phone plan will be implemented by 2009. Wishful thinking at its […]