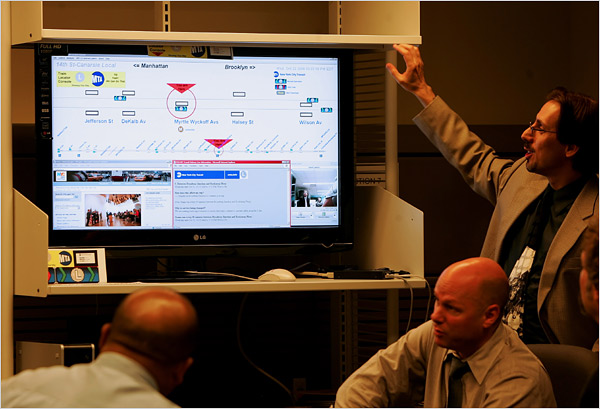 In my morning missive on GPS-based advertising, a few commenters wondered why, if an advertiser can employ GPS, the MTA can’t get its own GPS bus arrival board project off the ground. While some questions are simply unanswerable, the MTA — or more specifically, the L train’s line manager — is making strides to deliver real-time train location information to passengers.

As William Neuman reported today in The Times, by taping into the L’s computerized operating system, the MTA can show where the trains are on TV screens purchased at Circuit City. It’s a simple technological fix to a problem that has long plagued New York City Transit. The Gray Lady’s transit writer has more:

Beginning in December, officials will install a computer screen at each end of the platform showing a graphic representation of the entire L line and the location of every train on it. Waiting passengers can watch the trains move along the tracks as the data is updated every 15 seconds. That way, passengers can see for themselves if there really is another train “right behind this one.”

If the system works, and riders like it, it could be installed in other stations on the L line, said Greg Lombardi, the line’s general manager, who helped create the system. Ultimately it could be used on other lines as well.

“There’s no end to the possibilities,” said Wilson M. Milian, a director of technology projects at the transit agency. He said that the same information could some day be displayed on the Internet, so that riders could quickly check the location of trains before heading to the subway.

Imagine that. Real-time train information in New York City. This could be the push the MTA needs to update the rest of its technology.

As Cap’n Transit writes, the MTA could introduce this technology across its agencies, incorporate it with service advisories and provide a historical database of real-time train information. The possibilities are truly limitless, and if this is the innovation coming out of the nascent line manager program, by all means should it be continued and expanded.

The pitfalls of GPS-based advertising

As of today there are still the same amount of superintendents on the L line than before the general manager program started. I thought the point was to shed alot of these useless positions.

There is so much excess supervision in transit these days they are starting to make up things to do to try and justify there high paying jobs!

But I thought the train arrival Passenger Information Displays were already showing train arrival data…although having an actual graphic display of the entire line does give riders a greater sense of control – and ease of mind.

So a project in the works for 10 years gets credited to a manager that has had the job for 6 months?

Why should the installation of large screen monitors that can display service advisories have to wait for the arrival of CBTC or GPS? Announcements over loudspeakers will never be made to really work in the cacophony of the New York subway.

[…] months ago, New York City Transit announced its plans to bring real-time train location information to the L line. As part of the Line Manager program, this innovation would be implemented on a trial […]