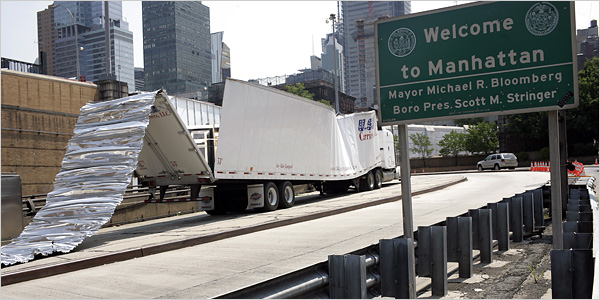 When I first read this story on Friday, my reaction was simply, “This guy is an idiot.” Here’s the story: A truck driver from Texas drove his 13 foot-6 inch tall truck through the 13-foot tall Lincoln Tunnel even though the warning sirens had rung and police had warned him to stay out of the tunnel.

Once inside the tunnel, as the roof of his truck scrapped tiles off the roof of the tunnel, the driver, Gilberto Cantu, continued to drive from New Jersey to Manhattan. Here’s what The Times said:

Mr. Cantu drove the entire 1.5 miles of the tunnel from Weehawken, N.J., to Manhattan, tearing his way under the Hudson River in the tunnel’s center tube and peeling back the roof of his tractor-trailer as if it were a tin can. No one was injured, but an undetermined number of decorative tunnel ceiling tiles were ripped off.

It was unclear why Mr. Cantu did not heed warnings from flashing signs and a loudspeaker in New Jersey, said Steve Coleman, a spokesman for the Port Authority of New York and New Jersey, which operates the tunnel. “There were enough bells and whistles going off that this should not have happened,” Mr. Coleman said. “He told the officers he didn’t know where he was going.”

According to the Port Authority, trucks are turned back around once a week. Usually, drivers heed the warning bells and police loudspeaker. But not Mr. Cantu.

And why, might you ask, would Mr. Cantu ignore these sirens? Well, Cantu, a four-year veteran of a trucking company that professes to run frequent routes to New York, told police he was confused and didn’t know where he was going. Newsflash, Gilberto: You’re at the Lincoln Tunnel. It goes one way from New Jersey into Manhattan.

Cantu now faces charges of nine moving violation misdemeanors which, according to The Times, include reckless driving, failure to obey a traffic signal and failure to obey an officer’s command.

U.S.A. Logistics, Cantu’s employer, hasn’t yet decided on this driver’s future with the company. They will however have to pick up the tab for the tunnel.

Meanwhile, I would like to belatedly award Gilberto Cantu with the Idiot of the Week award. It takes a special kind of person to drive through the Lincoln Tunnel for 1.5 miles while scrapping the roof off your truck and the tunnel without noticing. Nice going, Gilberto.

A look at the decreasing frequency of the...

Thoughts on the eve of the opening of...

Port Authority declines an opening ceremony for its...

I’m all for beating stupid people with a stick. It might slow stupid stuff like this. Even if it didn’t, it’d still feel good 🙂

I hope Gilberto Cantu has to pay every penny to fix the tunnel.

I forget where I originally read about this incident (maybe the Times article) but they repeatedly mentioned that fact that the driver was from Texas as if that explained his stupidity.