With the 7 on the way, a swan song for a Times Square platform 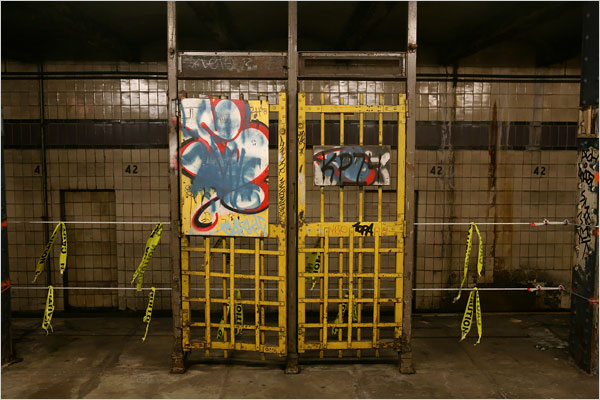 The old platform on the lower level at Times Square will soon be lost to the 7 Line Extension. (Photo by Tyler Hicks/The New York Times)

Astute subway buffs know where to look for the tell-tale signs of the mysterious lower level underneath the 8th Ave. IND platform at 42nd St. Stand on the northern edge of the uptown platform and look all the way across the tracks. If you look closely, you can see another level of subway tracks beginning a mysterious descent seemingly to nowhere.

Well, it’s not quite nowhere. Those tracks lead to the long-abandoned lower level platform that, for a few decades from 1959-1981, was home to the Aqueduct Express. The tunnel feeds into the lower level E platform at 50th St. and terminates with a merge, now out of service, in between 42nd St. and 34th St. on that IND line.

In Sunday’s Times City Section, Alex Mindlin writes about the waning days of that lower level platform. It is currently in the way of the 7 line extension and will soon to lost to the ages:

But the platform endures, gathering dust and grime. And it has seen more activity this year than in the previous few decades. Workers are preparing to demolish part of the platform so that the extended No. 7 line can cut across the space on its way westward. Other sections of the platform will be turned into electrical and hydraulic rooms; the rest will be walled off. The work should be complete in about four years…

Several films have been shot here; the track walls bear some “47-50” signs that, at this 42nd Street station, must have been intended for a movie. In the best-known scene shot at the location, from the 1990 film “Ghost,” Patrick Swayze stands on the empty platform and learns from another ghost how to move objects with his mind.

This great photo at NYCSubway.org shows how the station signage was cannibalized by Hollywood for those movies.

What Mindlin’s article misses is the amusing story behind the origins of the platform and its original purpose. After it was built during the construction of the IND lines in 1932, this lower level platform sat idle and unused until those Aqueduct trains started running 27 years later. Joseph Brennan’s abandoned station page for the platform speculates that the platform could have been used to hold Queens-bound trains at 42nd St. without impeding other trains along the 8th Ave. line.

But I prefer the theory set forth on the station’s NYCSubway.org page:

An oft-repeated story offers this as a reason the lower level was built: The Independent subway was being built by the city to compete directly with routes owned by the IRT and BMT companies. The #7 crosstown IRT line terminates at Times Square; it is said that the bumper blocks of the #7 are directly against or very close to the eastern wall of the lower level of the 42nd St. IND station. The construction of the lower level therefore blocked any potential extension of the #7 line to the west side of Manhattan. If this is true, it would have been done only in the spirit of crushing the competition, for the IND had no plans to construct a competing crosstown line.

This now-decaying station won’t impede westward progress any longer, and as the 7 line inches its way west, this platform will be lost to the annals of New York subway history. While the West Side 91st St. station and the famous City Hall stop exist through subway windows, this lower level platform will end up a legend of the subway, perhaps built to stop progress and now destroyed in the name of progress.

[…] started the week with a tale about a doomed abandoned platform at 42nd and 8th Ave. Let’s end the week ten blocks north standing outside a gated subway […]

I thought this was the 42nd Street/Port Authority Bus Terminal station? No? The IND 8th doesnt stop at Times Square.

If you want to get technical about it. It’s part of the 42nd St. complex.

What bothers me about these built but hardly used stations is the amount of work that went into them for nothing. Men, probably immigrants, took care to build this thing properly and it was all a waste.