Home Queens A facelift for the Jamaica Ave. elevated
Queens 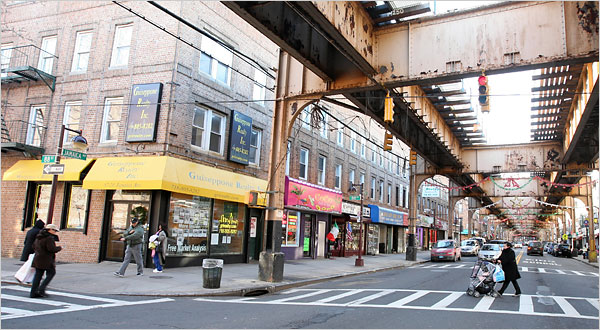 Business owners and residents who work and live underneath the Jamaica Ave. el have long called upon the MTA to spruce up the tracks. (Photo via The New York Times)

When the current BMT Jamaica elevated open east of Cypress Hills in 1918, the city’s papers hailed this subway expansion project. The new line, part of a city-wide expansion effort, provided a fast, five-cent trip from Jamaica and Richmond Hills to Manhattan for just $2 million, and the rail route had space for, in the words of a contemporaneous report, “a centre track to be constructed for use of express trains at some future time.”

The third track never arrived because subsequent engineering studies determined that the vibrations would damage the elevated structure, and since then, the BMT Jamaica line has often seemed to be an afterthought in the eyes of those in charge of the subway. For the past quarter century, alleged one area business owner who has pushed the MTA for renovations, the elevated has been allowed to degrade, and rusty supports and flaking paint mar an otherwise lively neighborhood.

“Our avenue is clean and bright and very vibrant,” Maria Thomson, executive director of the Woodhaven BID said to The TimesDaily News, the MTA will overhaul the Jamaica Ave. el, currently home to the J and Z trains. As part of a $20-$30 million capital renovation set to begin next year, the authority will “rehabilitate steel girders and paint almost 3 miles of the line between the Cypress Hills station and 130th St.” The project should last approximately 30 months, and business owners — who have been promised similar renovations in the past — are holding their breaths. Perhaps the octogenarian elevated will shine again.

This is really great news, if they can keep within budget. I also hope they can build a third track – or, better yet, four-track passing sections. The J/Z is an underrated connection between Brooklyn and Queens, weighed down by the fact that it’s horrendously slow.

So how would you tackle the constraint of Fulton Street?

By not building extra tracks there, and relying on scheduling to make this work. It’s difficult and nonstandard for urban rail, but it’s doable, and may be worth the effort in this case.

Would it be possible to build a single track elevated or subway line along Jamaica Ave between the Bway Junction and Cypress Hills stops? It’s only about one and a half miles. It would bypass the stretch on Fulton and the slow curves to and from Crescent St, connecting with the train line on Jamaica Ave that was built for three tracks. It could provide a rush hour 4 stop train line between Jamaica and Manhattan, 7 stops to Fulton and 10 stops to 42nd St if you use the Chrystie St connection. And it would have a bright and shiny paint job!!

Possible, sure. But not popular. The line would not serve area residents, so it would get little community support. A subway would cost way too much for the ridership we’re talking about.

I think the best solution is to four-track selected areas, and then run the Z as an extra express service, in both directions. If the local J and express Z run every 10 minutes each, a station stop time is 45 seconds, and the local leaves Jamaica Station 2 minutes after the express, the next express train will catch up after skipping about 10 stations. With express stops at Woodhaven and Crescent, this would allow the line to be entirely two-tracked except for a four-track passing section at Broadway Junction, which has space for it. If in addition there were three tracks on Jamaica, and Woodhaven were rebuilt to have two island platforms, then you could increase frequency to once every 7.5 minutes, with an additional timed cross-platform transfer at Woodhaven, or alternatively keep frequency at 10 minutes and have more schedule slack.

Sadly, it sounds like nobody at the MTA is interested in adding enough strength to support a third track. They’re doing just enough to keep the thing from falling down.

I lived not too far from that very picture, and grew up in that neighborhood. It would be a welcome change. I remember the last time they did any major work on those stations was to tear down one access side of all the stops. Though I never officially knew why, it was probably a safety and health hazard, since they didn’t have token booths there, and only the old square-bar turn-gates.

When the train runs fast, you can get from Woodhaven to the city in 45 mins. If not, you’re looking at an hour plus.

Everyday I take the M from the elevated station at Knickerbocker to work in the Financial District. And wonder / worry about the state of the Knickerbocker station which looks to be in mid-renovation / restoration without actually any work every being done. While not as bad as the Jamaica line. It would be nice to see some work on rickety stairs and the plywood covered doors we have at Knickerbocker.

And the M train too could have 3 track. The line was built for express the entire way. (Although recent re-configurations at the lovely new Wyckoff-Myrtle station have eliminated some of the spacing in the middle (easily recoverable, though). Speaking of that station, there is an unused retail space on the Myrtle Avenue side which while maybe not an ideal location for a business would be an excellent spot for a really nice bike station. Maybe not as big a deal in NYC where bikes are allowed on trains, but with the large bus transfer station there seems like a missed multi-model opportunity for the many bicyclists in Ridgewood and Bushwick.

If the demand was there, the Myrtle Avenue line could be 3-track. But such a configuration would be mostly meaningless (i.e. over capacity) unless the Broadway elevated was reconfigured to 4 tracks or if the Myrtle Avenue elevated is ever extended again to Downtown Brooklyn or elsewhere.

I should say the 4-track extension should also apply to the Williamsburg Bridge as well. But that will be next to impossible without reconstructing the bridge.

If the Arts Commission could get its hands on the el(s), this one could be a lot of fun with colored beans and girders. The lady said the street below is lively. But that’s not on offer. I’m sure they’ll get a choice of grey or beige.

Beams. Though colored beans could be fun, too.

They are painting it green, which I hate. Why does everything in NYC always get painted green? It’s really an ugly color for steel.

You know I was thinking about that last night. The blog Pruned did a whole series of posts on really nice parks built in “forgotten” spaces below and between freeways. There’s been some wonderful spaces reclaimed in pacific northwest: reconnecting neighborhoods, connecting communities to their waterfronts. I was wondering what could be done to make the underside of the elevated tracks more interesting visually. Provide more cover from falling dust… heck even provide more coverage from rain — which is why I was thinking of it… I was walking under the elevated to protect myself from last night’s deluge.

I’d love to see the same thing happen under the FDR that disconnects lower manhattan from the waterfront, or the areas underneath the Metro North line through harlem. These are dead spaces that could be both unique and neighborhood enhancing. And maybe in the case of elevated trains if well done… we’d discover again that elevated trains are an effective way to add transit to our city.

A start would be to revive the 1950s plan of making the line straighter after crescent, with the line goin thru grant-82 to avoid the S