A subway art project in the abandoned Underbelly Once upon a time, in the late 1970s, the subways were covered with graffiti that many considered art. This wasn’t the sloppy graffiti tags of today that involve a scrawled name or an uncreative expletive. These were full-car murals, sometimes with messages, that took time, skill and a certain willingness to spit in the face of authority. Today, even as we are commemorating early-1980s graffiti, we still debate whether these markings are art, vandalism or some mixture of the two.

Over the weekend, a story of subway graffiti and abandoned stations took the Internet by storm, and today’s Times Arts section has The Underbelly Project splashed across the front page. Per the project’s website, the concept is simple:

In early 2009, a project began four stories underneath the skin of New York. For nearly 100 years, a massive subway station sat unfinished, unused, and undiscovered. Over the course the last year, artists have been secretly escorted into this station to leave their creative mark. Unobstructed by the pressures of commercial sales, phone calls, or daily routines, each artist painted for one full night. The Underbelly Project is the result of the past year. At the close of the project, the entrance was removed and darkness reclaimed the space once again.

Jasper Rees’ piece in The Times goes more in depth. Workhorse and PAC, two street artists, came up with the idea a few years ago after seeing the abandoned subway stop, and the two took Rees on a secret tour recently. Rees can’t say where it is — more on that later — and he can’t say how they got into the station. The two artists, he says, are “seriously concerned about the threat of prosecution.” The two picked this station because, said PAC, they loved “the solitude of being underground.”

Rees talks more about the secret and hidden art show:

A vast new exhibition space opened in New York City this summer, with a show 18 months in the making. On view are works by 103 street artists from around the world, mostly big murals painted directly onto the gallery’s walls. It is one of the largest shows of such pieces ever mounted in one place, and many of the contributors are significant figures in both the street-art world and the commercial trade that now revolves around it. Its debut might have been expected to draw critics, art dealers and auction-house representatives, not to mention hordes of young fans. But none of them were invited.

In the weeks since, almost no one has seen the show. The gallery, whose existence has been a closely guarded secret, closed on the same night it opened. Known to its creators and participating artists as the Underbelly Project, the space, where all the show’s artworks remain, defies every norm of the gallery scene. Collectors can’t buy the art. The public can’t see it. And the only people with a chance of stumbling across it are the urban explorers who prowl the city’s hidden infrastructure or employees of the Metropolitan Transportation Authority.

That’s because the exhibition has been mounted, illegally, in a long-abandoned subway station. The dank, cavernous hall feels a lot farther than it actually is from the bright white rooms of Chelsea’s gallery district. Which is more or less the point: This is an art exhibition that goes to extremes to avoid being part of the art world, and even the world in general.

The piece goes on to talk about the artists who agreed to participate. Some came from as far as Europe while many were New Yorkers who jumped at the chance to explore this subway station. Rees also details, in broad strokes, how the artists accessed the spot, how they turned this dark and dank walls into a canvas and why Workhorse and PAC chose this site and had this image of it. Some time soon, the two curators will unleash on the world a list of the artists and pictures of the work. For now, we’re left with an extensive gallery on Luna Park’s blog and The Times’ own gallery. It’s quite a glimpse into a part of New York City few, if anyone, will ever seen, but it’s enough to tell those of us familiar with the subway system where it is. 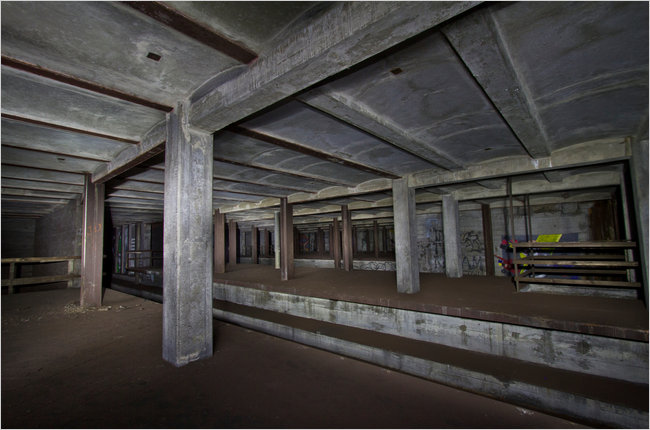 One of the Underbelly Project's curators offered up this wide shot of the never-used shell station. (Credit: Workhorse/The New York Times)

Based on the visual evidence, it is in the never-used, once-built shell of a subway station at South 4th St. and Broadway in Brooklyn. I traced the unique origins of this long, lost part of the Second System two years ago, and Subway & Rail has a full gallery of this station online. Built in an age when the city built shell stations for cheap with an eye toward future expansion, this shell has set empty since the day the concrete was poured. Rumor has it that one can access the station via the G train stop at Broadway with the appropriate key.

The stories Rees tells bears out my guess:

The Metropolitan Transit Authority would occasionally shut down the nearby subway line. The artists, working through the night, would hear workers on the tracks and go silent, turning out any lights. The members of Faile were among several participants stuck that way for hours after their work (in their case, a woozy, zigzagging version of the Stars and Stripes) was done. “We were getting crazy,” Mr. McNeil recalled. “We were like, ‘We’ve got to get the hell out of this dusty blackness.’ You couldn’t see your hand in front of your face.”

Finally at 4 a.m., Mr. McNeil said, the coast seemed clear, and “we walked out there with our gear”; but the workers were still there. “We just walked by them and they’re like, ‘Where the hell did these guys come from?’ ”

The scariest moment came around 1:30 one morning, just after Workhorse had left the site with a Moscow-based Australian artist known as Strafe (who spoke on condition that her real name not be used). They heard workers nearby and sprinted back in the dark, but once back on their platform, Strafe said, “I swung round and stepped into thin air, and literally fell onto my back on the track bed.” Too stunned to move, she looked at Workhorse, who had jumped down to join her with a flashlight. She said she saw a look of horror that said, “ ‘What are we going to do if she’s seriously injured?’ ” Eventually she was able to sit up, but they still had to wait until after 5 a.m. to leave.

For its part, the MTA seems none too pleased with this revelation. Transit spokesman Charles Seaton said to The Times only that what the artists did constitutes trespassing, punishable by law. Anyone caught defacing M.T.A. property is subject to arrest and fine.”

The artists too understand both the insanity and inanity of what they’ve done. After taking Rees and a reporter from London’s Sunday Times on a tour, they destroyed the equipment they used to access the station. “We’re not under the illusion that no one will ever see it,” Workhorse said. “But what we are trying to do is to discourage it as much as possible… If you go in there and break your neck, nobody’s going to hear you scream. You’re just going to have to hope that someone is going to find you before you die.”

It is a dangerous thought about a morbid project that somehow captures both the recklessness of a bygone era, the foolhardiness of this undertaking and the mystery of an abandoned aspect of the New York City subway system. I don’t think Arts for Transit will approve.

Map of the Day: A culinary subway ride

I deduced that it was South 4th Street, too, but for a moment, I was hoping they’d found the mythic 76th Street station.

very good guess. there are other sites but not as extensive. great story. thanks, PPW.

76th Street is an urban myth.

And real convenient. They probably all live nearby in Williamsburg, Bushwick and the East Village. That’s probably how they discovered this place originally.

Someone should paint a Dali image down there, Dali lived in NY for 10 years, but is no longer with us.

If I were the MTA I’d be figuring out how to sell tours to billionaire bankers at $100K a pop.

It’s a fascinating story and not surprising that someone was inevitably going to identify the location. Small and irrelevant detail: the journo who wrote in the UK Sunday times was also Jasper Rees, the NY TIMes and Sunday Times stories are different in detail and feature anecdotes from different artists, much more UK centric over here.

[…] news of the Underbelly Project’s subway station art show hit the Internet this weekend, subway lovers scrambled to adduce the site and quickly settled upon […]

[…] haven’t checked out what’s going down – literally – in NYC, make sure to read this article. For some great browsing, check out […]

[…] news leaked of the Underbelly Project gallery at an abandoned subway station somewhere in New York, I assumed that the MTA would quickly identify […]

[…] this week, that history exploded onto the front pages of The New York Times when the Underbelly Project, my latest subway obsession, became public. Not technically located in an abandoned station, the […]

we went down there 2 nights ago and from I can see we have the best comprehensive photos of the space. sucks that some asshole defaced some amazing pieces though…
http://burymeinbrooklyn.com/blog/?p=716

[…] Underbelly Project story hit the Internet like a wave on Sunday night, and as the story broke, it seemed clear that PAC and […]

Very lame. I have seen a lot of actually graffiti artists are upset about this project. I think it was all summed up perfectly here: http://hosteighteen.com/blog/?p=188

[…] A subway art project in the abandoned Underbelly The most popular post of the year was, of course, about the underground street art project that […]

[…] explorers who poke around in areas off limits to the city’s law-abiding citizens. After the Underbelly Project drew headlines and arrests, urban exploration has become the next great Internet […]

[…] intrepid — or foolhardy — New Yorkers try to shake us from our routine. We hear about guerrilla art projects in abandoned stations or spot the Rebel Alliance on the 6 train. Every year, thousands of people ride the subways with no […]

[…] the transit system, I’m not the only person who find the subways strangely alluring. From abandoned, half-built station shells to shuttered stations at 91st St. or the Romanesque Revival architecture on display at City Hall, […]