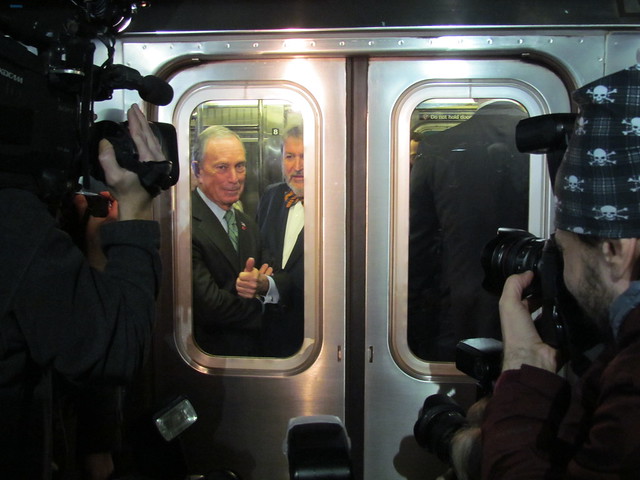 Michael Bloomberg will be but a distant memory when the 7 line finally opens. Here, he gives the thumbs up at a premature ribbon cutting in late 2013. (Photo: Benjamin Kabak)

Mark your calendars. Save the date. Scratch out the last reminder. For real this time, the MTA has re-announced a new opening for the 7 line extension, and if all goes according to the latest plans — a big “if” recent developments considered — the one-stop westward swing will be in revenue service by February 24, 2015, only 14 months after then-Mayor Michael Bloomberg’s photo op/ribbon-cutting ceremony in the waning days of his tenure.

For the MTA, capital delays are nothing new. No major project has opened on time, and even something as simple as the Fulton St. Transit Center headhouse has been pushed back until October. The 7 line has been beset by delays throughout the course of this project as it was originally proposed as part of the 2012 Olympics bid, should have been opened mid-way through 2013 and then prior to the end of Bloomberg’s tenure. At the December ceremony, the MTA discussed a spring opening, and then they mentioned summer, and then they mentioned fall and Q4 2014. Now, it seems this thing, with its problematic ventilation fans and prickly elevators, will open next year. Maybe.

According to materials released by the MTA on Friday, the project will be approximately $16 million under budget, but challenges remain to meet even that February date. According to these materials, the MTA is still struggling to see ventilation fans and communications system pass factory acceptance tests, and the elevators too remain a question mark. Final tests on the vent fans are planned for November while the high-rise escalators and incline elevators will undergo their examinations next month.

In an independent examination, though, the MTA’s external engineers noted that a February start date may be aggressive. If the accelerated schedule for wrapping the tests cannot be met, the MTA and its contractors won’t meet the February date, and in fact, the Independent Engineering Consultant predicts a March 2015 revenue service date for this project, one month later than the MTA’s goals. We’ll find out soon enough.

One of the problems with this project was the way it was scheduled. Original plans contained no contingency time in order to meet the goal of finishing with Bloomberg was still in the office. The MTA has blown past that deadline with an end vaguely in sight; yet, the agency still promises an on-time completion for the Second Ave. Subway. We’ll find out about that soon enough too.

Meanwhile, the IEC urges the MTA to finish its coordinated review of Capital Construction projects to ensure adequate resources are allocated internally. With Sandy work ongoing, and moving at a brisk pace, it seems there is a push and a pull on the MTA’s finite resources. Improving management and on-time delivery will help garner public support for the next few billion dollars in capital expenses. Right now, we’re just waiting for the 7 line to open.

That’s so disappointing – I was really hoping the 7 extension would run in time for marathon number pickup this fall. From mid-2013 to February 2015, this is a long extra 22 months to wait for a subway station at the convention center.

Hmmm, what would the MTA have done if by some miracle we had won the Olympic bid in 2012?

If NYC got the Olympics, the line would have opened a few weeks before the opening ceremony.

Post-9/11 rebuild of the 1 and post-Sandy repairs have shown what the MTA can do when there is real pressure.

It actually removes real pressure, since red tape is what is dispensed with.

Run a gondola along the route in the mean time.

Run the gondola to Secaucus.

Some entity other than the MTA should be building our transit infrastructure and then turning it over to them to operate (if they must still exist.) The business case is obvious by now.

Over budget and delayed

However, the contractor paid for the delays and cost overruns. The contract was written well.

Considering that all the original Els and subways, prior to IND, were built either privately (Hudson & Manhatan), or through PPP (NYC BOT and IRT/BRT), this isn’t new.

The problem with the Silver Line, there isn’t a competitor lurking nearby to eat your lunch. Both the IRT and BRT knew that if one of them messed up the next contact for new lines could favor the other.

Additionally, the coordination along the Flatbush trunk (Atlantic to Grand Army Plaza) between the two is an indication of what is possible if the contracts and projects are well thought out.

Oh, you mean like the Metropolitan Washington Airports Authority building the Silver Line?

No, I didn’t have that in mind, or anything in particular, but it’s safe to say that what we got today ain’t workin’

Yes, the Chinese do things quick. Take a look at all those high-tech new subway lines opening by years end. Meanwhile in NYC, Shanksa is laughing all the way to the bank (literally)…

Haha what a hideous name

Take a look at the shoddy work they do

I remember the MetroTech transfer actually opened ahead of schedule.

That Metrotech transfer is one of the more useful things the MTA has done in recent years.

Many people transfer there now.

It was especially valuable during the year the R tunnel was closed.

“the project will be approximately $16 million under budget”

And I could lose 10 pounds instantly if I cut one of my arms off.