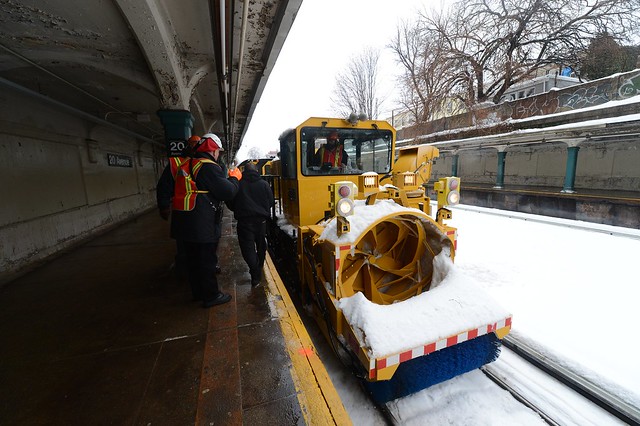 In case you’ve missed it, there’s a big amount of snow heading our way. The National Weather Service is warning of a “crippling and potentially historic blizzard” will hit the city with snow totals predicted to be 20-30 inches or more in some areas. The last time a storm of this magnitude struck, passengers were stranded for hours on an N train stuck in Brooklyn and an A left near Howard Beach. Since then, the MTA has been very proactive in managing subway service and its storm response.

As now, it’s not clear how Monday is going to unfold. As of just before midnight, the MTA’s website offers up only this tidbit regarding tomorrow’s New York City Transit service:

NYC Transit personnel are in place to clear platforms and stairs of snow. De-icers and snow-throwers have been strategically deployed to focus on outdoor areas and open cuts that are the most susceptible to high snow accumulations.

The MTA is planning to operate normal bus service tomorrow morning, but depending on road conditions, service may be curtailed as the day progresses. All local buses, including articulated buses, will have chains or snow tires installed by tomorrow’s PM rush hour.

Gov. Cuomo meanwhile has sounded a more urgent alarm. While asking commuters to stay home if possible, the governor has said “the public transit network including…MTA Subways and Buses may be closed ahead of the evening commute.” The language is rather stilted, and it’s not totally clear what Cuomo means. My guess is that he’s referring to a Plan 4 response to the storm.

In all likelihood, then, as the snow begins to fall around 1 p.m. tomorrow afternoon, the MTA will look to curtail service. Trains will be stored on underground express tracks, and all express service is likely to run local. At-grade subway lines — such as the A through the Rockaways and the N down the Sea Beach Line — are likely to be curtailed while the trains that don’t run 24 hours — the M and the B — will stop early. Now, that’s not official, but that’s been the general approach to major snowstorms.

For the MTA, this week’s storm is shaping up to be a big test. They’ve had successful storms over the past few years, but we haven’t seen something of this magnitude in over four years. Since then, the subways weathered Irene and emerged limping out of Sandy. We’ll see how this week’s storm goes, but ultimately, the same advice applies: Don’t travel if you don’t have to.

I’ll update the site with any weather-related service advisories as they are announced. For now, we’re all just waiting for snow and waiting for service changes.

You would think that even in the face of a very bad storm that some service would remain in the long underground stretches ( A from north Manhattan to Euclid ) or in some cases the purely underground lines ( E, R )

Even occasional back and forth service on one track would be a lifesaver for stranded persons, who will be many

I totally agree with you. They should play it according to the conditions on the ground as the storm develops. We definitely need no people stranded here or there on elevated tracks, but in my opinion they should have a plan to shut down only the above ground sections of the lines as needed and run the underground portions with at least some service. The E and the R are great examples as they are completely underground, but they should be ready to do things such as running the 1 between South Ferry and wherever the last underground switch is (somewhere around 191st maybe?). Or the 5 between Flatbush and Grand Concorse. Clearly there is no need to run full time schedule while the lines are shortened like that, but some service will be better than blanket shutdown.

the fact that service cannot be provided to the outer boroughs does not mean that we should punish Manhattan too for the sake of spreading the pain and inconvenience around.

I think the unfortunate mentality we’ve adopted now is that because many people conflate “travel” with “driving a car,” there’s this idea that we shouldn’t encourage people to go anywhere even if they can with no risk because many can’t without risk. “Stay home” sends a clearer message, even if 3 feet of snow doesn’t really cause any issues with walking and riding the subway in Manhattan.

NYC never used to cancel school for weather– I think there were no citywide closings prior to the once-a-decade storms of the 70s and 80s–but now it seems to be a yearly event. You can blame climate change, but it’s mostly because we never had as many NYC teachers living in the far reaches of the Hudson Valley or Suffolk County.

it’s not particularly safe to be wading through two feet of snow to get to the subway to go someplace that is closed because of the snow.

Your event tomorrow for the transit museum might not have too many people attending if this storm hits as big as it’s been predicted. Also, the $10 fee might stop folks as well. As of now (7:30 A.M. Monday), is it still scheduled?

Are your events at the museum recorded in any way?
Thank you.

Anyone with a complaint about the ticket fee should take it up with the Transit Museum. They’re the ones who set the admission policies for their events.

As now, it’s likely to be postponed, though the Museum will make the final call this morning.

We don’t record the events.

Snowmageddon – a serious storm no doubt, but Ben isn’t that a bit hyperbolic?

It’s just an internet meme. You’re thinking about it too much.

I’m going with Blizzardämmerung for this one. Gotta keep things fresh.

Prepare for the worst, hope for the best, Sean.

That’s what Patton did, and that’s what the MTA should do. It’s good policy.

Oh I agree – don’t get confused by what I posted above I was referring directly to the overuse of the phrase Snowmageddon & it’s variations & not to the seriousness of the storm itself.

Cuomo should let the professionals decide.

NYCTA has scarcely shut down due to storms in a century. No doubt there is a logic to shutting down some segments, maybe even scaling back bus service, but most of the subway network isn’t threatened by snow.

What was going on this morning? Some kind of job action or other attack?

Lex line was running fine during my morning commute (though I understand there was a rerouting around 9ish to deal with a sick customer).

I wonder why they couldn’t do citywide cross-honoring on the system? NJ Transit cross-honor systemwide. Not the MTA

Not so much about the trains as much as the snow. I’m not a meteorologist but I work in a facility that has hundreds of them (seriously) and while severe weather forecasting has advanced by leaps and bounds over the last 20-30 years, winter precip is still tough. Forecasting is better, but what you get at your house is completely different if there is a one degree difference at 5000’. What you really need to do is keep looking at the forecast because I promise you it will change. Keep an eye on http://weather.gov/nyc

If you’re interested in helping, there is a free app you can use to report precip wherever you are: http://mping.nssl.noaa.gov – this is the kind of data researchers need to make winter forecasts even better.

Some of the chatter I’ve seen indicates that this really could be a serious storm so please do pay attention! (see how I hedged there with the “could”)

Just curious but where do you work? Interested in what type of place would have hundreds of meteorologists . . .

Coast Guard or NASA are my top guesses.

LIRR and Metronorth no service after 10pm continuing through Tuesday

I always find the “stay home” advice to be laughable. How about telling employers to let their employees stay home?

Theres a bill in NJ that would do this. It would mean any employee that stays home during a state of emergency cannot be fired, aside from emergency management people.

That’s good, although I think the concern for most people is getting paid.

All subways shut down… This is what happens when politicians make decisions in a bubble.