Andrew Cuomo pens letter to self, asking self to release MTA Capital Plan 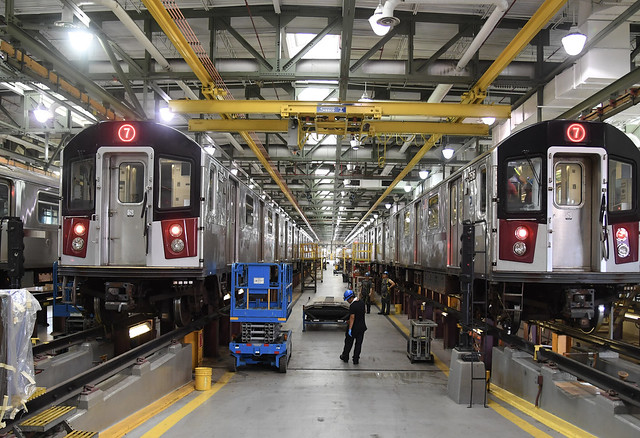 During a press conference earlier this week, Andrew Cuomo let loose a few of his thoughts on the MTA. “The MTA is responsible for the MTA. That’s why they call it the MTA,” he said, before adding, incredibly, “I can’t order the MTA” to act. Obviously, as we’ve seen with the ongoing emergency order, the opening of the Second Ave. Subway, the decision to halt subway service in light of a forecast of snow, the color of the tiles in the Brooklyn-Battery Tunnel, the Subway Action Plan and numerous other examples, this simply isn’t true, and Governor Cuomo, who makes key decisions regarding the hiring (and firing) of top executives is firmly in control of the MTA politically and practically. As I’ve written extensively lately, the MTA Board is a largely powerless but convenient political foil for Cuomo to hide behind when he doesn’t wish to take full responsibility for his own MTA.

To that end, it’s amusing to me when Cuomo goes through the political theater of sending a letter to the MTA Board suggesting or urging they do something, as he did this week with regards to the missing-in-action 2020-2024 Capital Plan. To recap: The capital plan is an exercise in construction through the MTA goes every five years. It usually involves a very public process with the release of a 20-year needs document followed by a draft of the five-year plan, some public comments and a re-submission of the plan for a vote, followed by a political fight over funding. This year, the funding arrived early in the form of congestion pricing, but the plan hasn’t been released to the public. I’ve been told that’s due to internal wrangling over dollars and meddling by the Governor himself. The MTA Board is expected to vote on a plan no one in New York has seen in twelve days, and that’s no way to run a railroad.

So back to Cuomo’s letter. You can read this missive right here. In it, he reminds the MTA that passing the capital plan is a legislative mandate and then outlines his priorities “before it is prepared and presented.” It seems a little late in the game to outline priorities for a document that’s supposed to be approved on September 25, but I digress. The priorities though are all over the place:

The quality-of-life issues are a red herring; they’re not part of the capital plan and solving them is a task largely outside the scope of the MTA’s authority. If Cuomo wants to combat homelessness, for instance, he should support aggressive affordable housing policies. The same can be said about providing safe and effective treatment for those suffering from mental illness. Plus, the MTA is already trying to combat these quality-of-life issues as they can (either by hiring more cops or expanding outreach services).

The “equitable” distribution of resources, similarly, is a bit of false priority as well. Some analysis has long suggested that Long Island the the Metro-North territories have gotten more than their fair share of capital dollars over the years, and either way, these areas never suffer for lack of representation in the five-year capital plan. As I’ve noted in the past as well, Cuomo’s renewed interest in East Side Access as it finally hits the home stretch is transparently political in nature. He wants a ribbon-cutting and some credit for a project that’s been an ongoing mess every single day of his tenure as governor.

The interesting parts are the rest: the accessibility imperative and the signal system. These are the underpinnings of Andy Byford’s Fast Forward plan, and a few senior MTA sources have told me that the Fast Forward priorities will be in the capital plan whether named as Fast Forward or not. The remaining fights seem to be over the dollar figures attached to each priority. Does this represent a thaw in the icy relationship between Byford and the governor? It’s hard to say, but it does seem to suggest the Governor has realized that he’ll gain more accolades by adopting the good work Byford and his team are already pushing than he would by forcing out or minimizing the passionate and competent team Byford has assembled. That’s good for New York. That’s good for Andrew Cuomo. And that’s good for the subway system.

Now, all that’s left is for the public to see this plan before the MTA Board holds its symbolic vote. We have twelve days and counting.

One challenge facing the MTA as it develops the next $40 billion 2020 – 2024 Five Year Capital Plan is to come up with funding. It is dependent upon a number of taxes and fees including Real Estate Transfer Tax and Congestion Price Tolling which combined equal $25 billion plus $7 billion in anticipated Federal Transit Administration funding. This totals $32 billion. This leaves a shortfall of $8 billion. Neither the MTA nor any elected official has yet to identify the source of funding to close this $8 billion gap. Congestion Pricing does not kick in until January 2021 or the second year of a five year capital program. The final details of who will pay what have yet to be worked out. In the meantime, many elected officials are lobbying for exemptions for those who provide essential services such as police, fire or teachers, low income, outer borough residency, seniors, small commercial based delivery businesses or other special niches. Some of these exemptions will be adopted to placate different elected officials constituents. As a result, the MTA may not be able to count on all $15 billion in congestion pricing funding. A downturn in the economy could also result in less revenue from the Real Estate Transfer and other tax income sources. The $8 billion shortfall could easily grow by billions more. The real battle is between reaching a state of good repair versus system expansion. I would argue that it would be better to place the $6 billion Second Avenue Subway Phase 2 project on hold. Use those funds to accelerate bringing more subway stations up to a state of good repair and into compliance with ADA by adding elevators.

The MTA must stop wasting millions on transportation feasibility studies for future system expansion projects that will never happen in our life time. Do not initiate any new system expansion projects until each operating agency, NYC Transit bus and subway, MTA bus, Long Island Rail Road and Metro North Rail Road have reached a state of good repair for existing fleet, stations, elevators, escalators, signals, interlockings, track, power, yards and shops. This should also include insuring a majority of subway and commuter rail stations are in compliance with the Americans With Disabilities (ADA) Act. Ensure that maintenance programs for all operating agencies assets are fully funded and completed on time to ensure riders safe uninterrupted reliable service. Let us see if adequate funding is provided to support all of the above in the upcoming $40 billion MTA Five Year 2020 – 2024 Capital Plan which is promised to be released this coming October.

Larry, those system expansions might not happen in YOUR lifetime but for the rest of us, who need to think about the world we are inheriting and the one we want to pass on, system expansion has to be part of the conversation as well as the problems that come with it; namely cost. You are absolutely correct in that each agency must reach a state of good repair. But this isn’t the 1970s when residents are fleeing the city in droves. NYC, as with many big cities, are attracting more and more new, young and hungry residents who want the type of transit oriented lifestyle a city like NY can offer. We need a system that works but we need one that can grow and adapt for the future. Every day I read about the city or state paying billions for one project or another. The fact is there is money available, we just choose to spend it on other things (many, obviously, very important). Transit, the arteries of the city, must be supported and.

I strongly disagree that the “real battle” is between bringing the system back to a state of good repair versus system expansion. Yes, the signals continue to fail and many of the stations needed to be repaired and made ADA-compliant years ago. But to say it has to be a choice between that and extending the Second Ave Subway further uptown? No, I’m sorry, but it really doesn’t have to be that way and the only reason it was in the 70s is because the City and the subway were in FAR worse shape then. We don’t need to do the son-of-the 1968 Plan for Action. We need something more modest. We need to start looking at what other cities do and not pretend it can’t be done here. Modestly designed three or four-stop extensions in areas that need better transit badly should not be too much to ask for.

How about an extension of the 3 line from New Lots Avenue to the existing Livonia Yard at Linden Blvd vía existing yard tracks? That would be a modest plan
.

I say take it all the way to Stanley Ave. There are lots of housing being built around Gateway Mall. Stanley Ave where track ends is about 3 0r 4 blocks from Gateway Mall

Number 2 can very much be part of the capital plan. Put in platform doors to reduce the amount of people that can trespass onto tracks (wasn’t this a cause of the Chambers interlocking fire?), or cases of folks being pushed on tracks.

There are modular half height platform doors that can be brought to the station by train and installed in a couple of hours. I guess it depends on whether the new signalling and trains are in though (but doesn’t mean you can’t start on the 7 and L)

It’s #CuomosMTA after all, messing with several millions of NYS bus, subway and train riders, as well as hundreds of thousands of toll paying drivers since 2011.