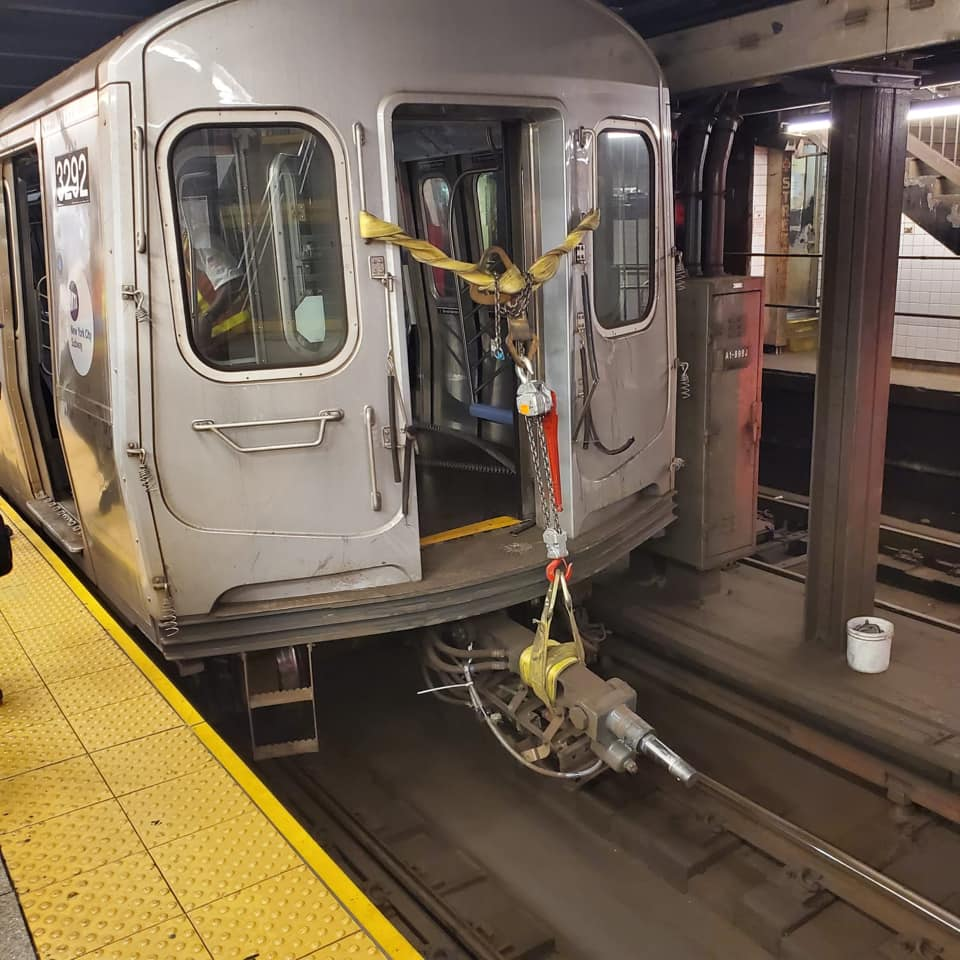 A photo of the R179 that unexpectedly uncoupled last night.

Just four months after restoring the R179s to service following significant door safety concerns, the MTA had to yank Bombardier’s faulty subway cars from service again on Wednesday. This time, the issue was an unexpected uncoupling that occurred shortly after 1 a.m. to an uptown A train entering Chambers St. The issue first came to light late last night via a Twitter post, and pictures of the incident were available via Reddit.

“Early today, just after 1 a.m. a northbound A train became separated between the sixth and seventh cars of the ten-car train as it entered Chambers Street Station. Ten passengers were safely evacuated with no reported injuries to customers or employees. At this time, we believe this to be an isolated incident, however, I am launching a full investigation, and out of an abundance of caution, the entire R179 fleet is being pulled from service until further notice. We have redeployed additional spare cars and minimal impacts to service are anticipated. This marks the latest unacceptable issue with one of Bombardier’s R179 cars. Customer and employee safety is New York City Transit’s North Star. We will not compromise one inch on safety. We will not return the fleet to service without certainty and validation that all cars are fit for passenger service – period.”

The R179s, which break down more often than older cars, have been problem-plagued from the start. Manufacturing problems and early testing failures delayed delivery of the full order, and the door safety issues caused then-NYCT President Andy Byford to pull the entirety of the fleet for a few weeks. It’s not clear yet how this will impact the MTA’s ability to deliver more service as NYC enters Phase 1 of the un-PAUSE process on Monday, and it is yet another issue for the Bombardier rail cars, which many consider to be lemons. In January, the MTA vowed to attempt to recover some money from Bombardier due to the ongoing issues, and debarment remains on the table. Bombardier is currently investigating this latest issue.

The MTA has a transportation plan for NYC’s reopening. Why doesn’t Bill de Blasio?

I wonder if the MTA NYC Transit ever conducted a formal Lessons Learned from this previous subway car procurement? If so, did they ever share it with the MTA Board and public? Since this was a federally funded project, both the Federal Transit Administration and MTA had their own respective independent oversight engineering consultants monitoring this previous subway car procurement for many years. Both should have issued a series of monthly and final reports. NYC Comptroller Scott Stringer also conducted his own audit. All three might make for interesting reading. Earlier this year, the MTA Board approved a $1.4 billion contract award to Kawasaki Rail Car for the purchase of 535 new subway cars. Let’s hope that the next generation of subway cars doesn’t suffer from the same problems as the R179s Taxpayers, subway riders, transit advocates, funding partners and elected officials should expect a better outcome from MTA. NYC Transit and the vendor for budget, quality assurance, quality control, adherence to contract delivery schedule and safety of equipment once in revenue service

(Larry Penner — transportation advocate, historian and writer who previously worked in 31 years for the Federal Transit Administration Region 2 NY Office. This included the development, review, approval and oversight for billions of dollars in grants to the MTA which funded LIRR, Metro North and NYC Transit capital projects and programs) .
.

This latest debacle with these cars means that the venerable old R-32 cars(the oldest cars in the NYCT fleet) will have to remain in service for a longer period of time. It’s a shame that NYCT who at one time was able to order and procure reliable and long lasting rail cars is now the laughingstock of the transit world.

R32 were made by Americans, for Americans, by a Deplorable Old Non-Subsidized business.
The new sh-t was made by a Quebec crony company, to be dumped on others.
The French make da n fine cheese wine & chocolate, garbage otherwise.

You can’t be serious. Bombardier sucks, but the French make some of the best railway equipment in the world. Their equipment has sometimes pushed boundaries that even Japanese equipment hasn’t.

We have to make the distinction between Bombardier North America, which cannot make functional rail equipment, and Bombardier’s European division, which makes world-class rolling stock. And Bombardier NA has a strong US presence. These flaws are not a big endorsement of Buy American, and it has nothing to do with the French.

Fair enough. But even the European division isn’t exactly a leader in this field, AFAIK.

Given its strength in automotive, aerospace, heavy construction equipment, you’d think railroading would be an area the U.S. could easily compete in. But the U.S. isn’t very well-positioned to design and sell HSR equipment because it has virtually no domestic HSR, so it pisses away most of the market a domestic industry might have.

Not exactly something we need to lose out to China on. We choose to. Yet even if an American firm wanted to do HSR, it’d probably need to manufacture in France, Germany, Japan, or China.

Since the R-179s were pretty much a ‘tweak’ to the R-160s, and not a major reworking as the R-211s are due to be, it’s amazing that they’ve been so problematic. The difficulties in the 1970s with the R-44s and then the R-46s were at least based in large part on major new technological introductions above their predecessor railcars, so that the components (including the ill-fated Rockwell trucks on the 46s) hadn’t been tested under the heavy abuse that NYC subway cars endure — the 179s are (or should have been) just a marginal step up from the 160s, designed to retire the last of the SMEE railcars from the 1960s.

Even the R-16s didn’t fall apart this early in their history — they never were as reliable as their IRT younger brothers, the R-17s, but three years into their existence, the main problems they had were unintelligible PA systems and not dealing with snow very well, to the point they had to be deployed more to underground lines during winter weather conditions — it took about 15 years for the other problems to really make them unreliable (or funky, with the slanted wall panels to hide the bigger door motors). It will be interesting to see if the 179s eventually suffer the same fate as the 16s, with a shortened lifespan after being hidden on the system’s lower-profile lines as much as possible, or if they can be redeemed after a rough start, as the R-46s were.

There is more to John’s excellent comments and reference to the new R179 and past history of other subway cars The MTA, as a recipient for several grants from the Federal Transit Administration that paid for this $600 million subway car procurement. could be on the hook for millions. All FTA funded capital improvements have a useful life requirement contained in the master grant agreements. Failure to meet this requirement, could result in the FTA requesting reimbursement based upon straight line depreciation for the remaining value, which was never achieved. I believe that the minimum federal standard for useful life of a subway car is 31 years. MTA corporate policy for the R179 and future generations is 40 years. Should the MTA NYC Transit decide down the road to prematurely remove any R179 cars from transit service before they reach the minimum useful life requirement, the MTA would potentially owe FTA millions for the remaining useful life not obtained.

(Larry Penner — transportation advocate, historian and writer who previously worked for the Federal Transit Administration Region 2 NY Office. This included the review, approval and oversight for billions of dollars in grants to the MTA which funded LIRR, Metro North and NYC Transit capital projects and programs) ..

Yes. Why are they so in a rush to scrap the R32s ? They needed to keep them they run great.
They saw the ridership dropped because of the pandemic and they rushed those cars off service now look. keep them in a storage yard somewhere.

They run well enough in service because they are subject to the increased maintenance frequency, and even then (admittedly going off memory here) their mean time between failures is much lower than newer equipment.

Either way, they’re old, and old equipment is inherently more prone to malfunction.

Will Mta ever bring back R179 cars? Sad

me: yay lemon back
lemon: I’ll still do the lemon behavior
me: why
lemon: I’m no longer in the C line ok