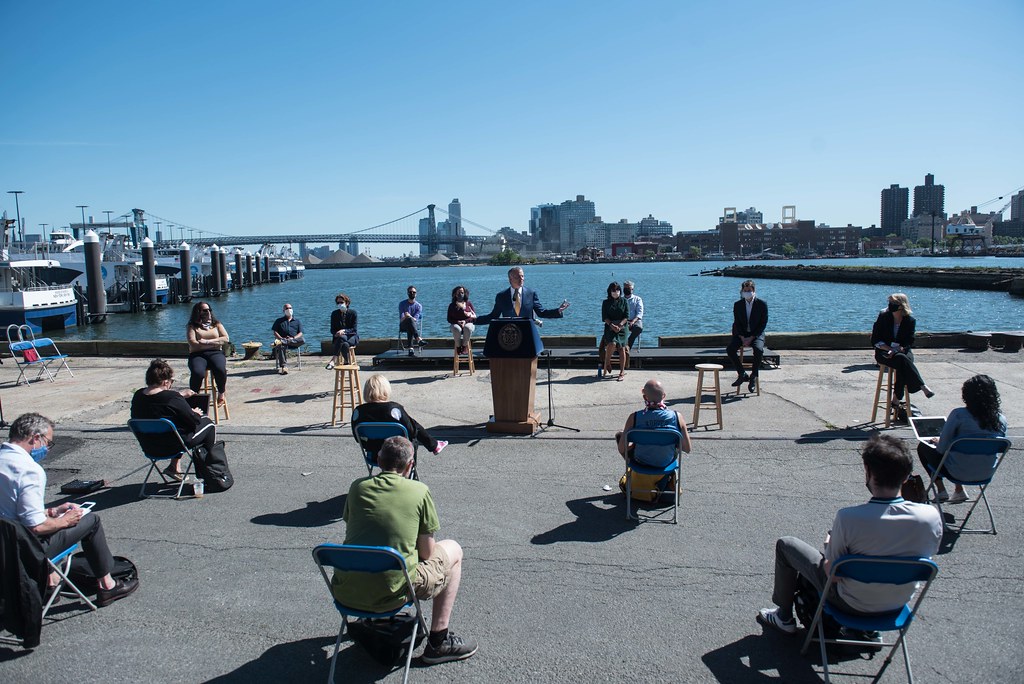 The coronavirus isn’t over. The pandemic rages on. And it does so in uniquely specific ways. While the threat of severe respiratory illness and risk of death looms over us all, we remain in all-encompassing public health crisis that manifests itself in the form of space. To reduce transmission risks and keep populations healthy, we need space. There is an urgency to get more people more space, and while that’s a lesson quickly learned by people paying close attention to the virus over the past few months, it is one Mayor Bill de Blasio and most of New York City’s political leadership still treat as an inconvenience rather than with the urgency it deserves.

The space we need is easy to identify. It’s much safer to be outside, masked, and generally a few feet away from other people. Though I am skeptical that transit in and of itself isn’t safe, it’s much safer for everyone to be spread out, for commutes to be staggered, for crush-load subway conditions to be avoided. This means buses should be prioritized above all other traffic and a spike in biking accommodated through the creation of a safe and wide-reaching network of pop-up protected lanes. Giving people more space and encouraging diversity in mode share allows for a functional and socially-distant city, and cities the world over have implemented these measures.

But not New York. Though we seem to have slowed the virus and our numbers are strong, the pandemic continues until a vaccine or cure can be found, but the city isn’t acting as though the problem is pressing. There is no urgent in the middle of a situation that demands it.

This lack of urgency manifests itself in the way space hasn’t been reallocated for more productive uses this spring. New York has an abundance of outdoor space — 6000 miles of roadway and multiple lanes across many of those miles — but most of it is taken up by inert cars parked for free on public land. The mayor at first didn’t want to do anything about this unequal allocation, even as people were stuck inside their tiny New York apartments, starved for fresh air and space. It wasn’t until the City Council forced the issue that the Mayor agreed to a paltry 40 miles of open streets in May and just a handful of additional miles this week after a needless four-week pause, and his implementation leaves much to be desired. A half a mile here, three-tenths of a mile there, and it all adds up quickly to 60 miles while open streets don’t connect in any discernible network, and neighborhoods that are home to hundreds of thousands of New Yorkers have gotten little-to-no extra space. If you had to design the worst possible open streets network far too slowly, the Mayor’s plan would qualify.

For a brief few minutes in early June, it seemed that some space would be allocated properly. For weeks, transit advocates and the MTA had begged the mayor for bus lanes. Bus ridership had remained relatively strong throughout the darkest days of the pandemic, and buses — with open windows creating natural ventilation — felt safer to many riders. As New York City finally sat on the verge of Phase 1 of the state’s careful and deliberate reopening process, I wondered why Bill de Blasio ha developed a transportation plan ready for Day One. After all, advocates, envious of cities around the world that had reimagined their streetscapes, and the MTA wanted 60 miles (or just 1% of city streets) dedicated to new bus lanes.

A few hours later, Bill de Blasio granted the city just one-third of what the MTA requested. As I wrote, I found the plan unsatisfactory and lacking, a symbol of the mayor’s commitment to refuse to work with the MTA while doing the bare minimum to make New York City a better place. It’s been over two weeks since the Mayor unveiled his plan, and nothing has happened. He called for 20 miles of busways and bus lanes by October, including a handful this month, but New York City has seen none of the promised lanes materialize or work progress. The NYC Department of Transportation has unveiled no details regarding design or a firm timeline for implementation. Simply put, there is no urgency from anyone involved when all of these lanes should have been implemented weeks ago or at least hours after the Mayor’s announcement.

Meanwhile, even projects that appear urgent end up slow-walked by a mayor afraid of his own shadow. Last week, Brooklyn Paper reported that the administration was considering converting a significant portion of the Brooklyn Bridge into a bike lane, but three days later, DOT walked back this report, claiming only the staffer had “misspoke“. Streetsblog later reported that DOT will study converting road space on the bridge for the umpteenth time in recent years. The Queens Ribbon is a poorly designed concept that masquerades as a solution for an urgent problem that requires nimble and fast resposnes instead.

It’s a disappointing outcome, but an expected one, at a time and demand for biking and safer bike infrastructure is off the charts in New York City. But Bill de Blasio seems intent to ignore this demand, acting again without any of the urgency of the situation demands. Instead, we get rendering porn masquerading as a real serious idea (like the so-called Queens Ribbon) to placate the advocates. Even if we take this idea, which was profiled in The Times yesterday, seriously, it doesn’t fit the situation. The design itself is insufficient with lanes that are far too narrow and suffer from the same design problems as the Brooklyn Bridge bike and pedestrian path. And it’s a plan that will take years to realize when we don’t have years. The urgent response would re-allocate lanes on bridges across the East River for bike and pedestrian use, and it would do it tomorrow. We’ve already burned far too many weeks fighting for scraps, and the current administration has given no indication of giving anything more.

The lack of urgency doesn’t stem only from de Blasio. It is an all-encompassing ethos that infuses his administration. While speaking on a panel hosted by City & State last week, DOT Commissioner Polly Trottenberg kept finding excuses to avoid implementing well-designed bike lanes or rapid-deployment bus lanes. New York, she said, isn’t Paris, a city where Anne Hidalgo has led an effort to implement a network of hundreds of miles of bike lanes in response to concerns over travel in the age coronavirus. Of course, New York and the Paris metropolitan area are of nearly equal size and density, but Trottenberg’s words are just excuses. She loves to find reasons to avoid doing anything rather than coming up with plans to act. We’re not Paris because Trottenberg and de Blasio don’t think it’s important for NYC to emulate the best of Paris, and we’re not even Lisbon.

The missing urgency isn’t focused only around surface transportation either. As Nolan Hicks and David Meyer detailed in The Post last week, de Blasio has no plan for any part of the city’s gradual reopening or imminent entry into Phase 2. He had no plans for outdoor dining; he had no plans to save the city’s struggling restaurants and bars, the heartbeats of so many neighborhoods; he had no plans until yesterday to open beaches as temperatures creep into the mid-80s; he had no plans until a few days ago to safely open playgrounds so kids could get outside; and he clearly has no plans for school in the fall. Even when he does implement plans, as he did for restaurants just a few hours before Phase 2 began, the plans were the bare minimum and provided little city support for a key economic activity. A few weeks ago, de Blasio told New Yorkers to “improvise” on getting to work and traveling around. Apparently, that’s the guidance for managing a city of 8 million through a public health and economic crisis infused with urgency.

The mayor, though, isn’t the only one slow-walking urgent transportation needs. The City Council has yet to act on legislation legalizing e-scooters in NYC and may not take up the measure until after the city budget is passed. Bronx Rep. Fernando Cabrera penned an op-ed in Crains New York last week calling for urgent action in the face of the pandemic, but during the that City & State panel, Council Speaker Corey Johnson said the Council wouldn’t take up e-scooter legislation for a few more weeks. The Council has since approved thee-scooter legislation, but the measure won’t take affect until March, nine months from now and well beyond the time when scooters could be used to lessen the pandemic related commute concerns. Amidst an emergency of immediacy, the city government continues to treat travel and transportation as business-as-usual, subject to the whims of a slow process designed to frustrate improvements. E-scooters should be legalized immediately to accommodate the urgent need for people to move safely and quickly around the city.

Ultimately, this lack of urgency isn’t new to New York City. The mayor never treated transportation, including his supposedly signature Vision Zero initiative, with urgency, and he didn’t treat the coronavirus with any urgency before the lockdown began in March. Despite having the entirety of NYC’s municipal payroll at his beck and call, he has set up panels of experts to come up with suggestions or recommendations for reopening, and some panel members have told me the mayor isn’t even obligating himself to follow them. It’s all a charade to slow-walk a response to a virus that demands urgency. We need more bus lanes; we need a bike lane network; we need a plan for travel and a plan for city businesses to survive the summer. We need to treat rescuing the city and responding to the virus in real-time with the urgency of a crisis, and right now, our leaders are simply failing us.

I originally wrote a version of this post last week and published it for the supporters of my Patreon. As a periodic reminder, 2nd Ave. Sagas is fully reader funded, and I can continue to bring these post to you with your support. Please consider joining as a supporter.

The answer to your over all theme is obvious, BDB like many other political figures across the nation just isn’t taking this virus seriously enough. You can see it in their policy decisions as you note here.

“Wayne’s that are far too narrow …”

Assume you mean lanes? It there whole paragraph contained a couple of duplicate sentences !

Something really needs to be done about the Brooklyn Bridge pedestrian and cycle path. When I walked across it last year far too many cyclists were riding aggressively and far too fast for even their own good if they hit another rider or pedestrian.

Didn’t you get the memo? Cyclists in a bike lane have an inalienable right to never have to squeeze their brake calipers – it’s up to the pedestrian to jump out of the way in time to avoid getting mowed down at 20+ mph.

There is no urgency in any policy the mayor proposes. This has been true from the beginning. He only reacts to public pressure by pandering.

What’s with the fake mayors? Can you guys elect someone who is serious about being mayor, for once, and will actually try to accomplish something useful?