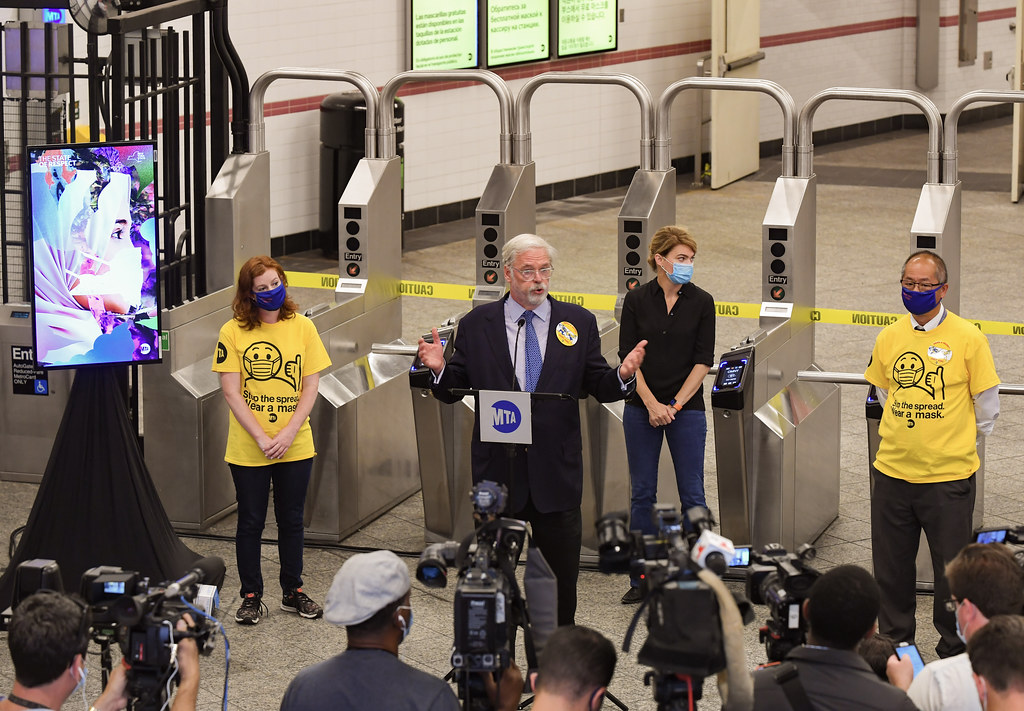 For those New Yorkers venturing onto the subway these day, it has become a hobby of sorts to track mask compliance. Jose Martinez of THE CITY runs Twitter scorecards tracking mask compliance using the terminology from the MTA’s own ad campaign, and while mileage may vary by line and time of day, mask compliance on transit in New York City is generally very good with 90-95% of riders properly masked up, according to MTA figures. For public health purposes, that level of mask usage is sufficient to significantly slow the spread of an airborne virus.

Still, compliance – with a mask over both one’s nose and one’s mouth – may have been slipping in recent weeks, and even 90% compliance isn’t good enough for the governor. Why? I’ll get to that shortly, but to that end, earlier this month, Gov. Andrew M. Cuomo announced a new executive order “directing the MTA to develop a plan to bolster mask compliance across public transportation system’s subways, buses and railroads.” The MTA, in turn, announced a $50 fine for any rider who refuses to wear a mask. In a sense, that’s an academic recitation of events. As Cuomo controls the MTA, he’s the one imposing the $50 fine, and the agency is simply serving its purpose as political cover for the governor’s decision.

“While mask compliance in the MTA system remains very high, we want to make sure that people feel comfortable coming back to public transportation,” Governor Cuomo said in his press release last week.

On Monday afternoon, MTA officials gathered at the Atlantic Ave. subway stop to discuss the enforcement effort and $50 fine. Enforcement of rules in the subway has turned into a bit of a hot-button issue in recent years as the MTA has faced criticism for heavy-handed fare enforcement efforts that seemingly target minorities and a ramp-up of NYPD expenditures at a time when transit budgets are crashing. Yet, during the press conference, MTA leaders took pains to stress the public health effects of wearing a mask and de-emphasize punitive punishment, especially when asked about the impact of a $50 fine amidst an ongoing economic downturn. “We’re not,” NYC Transit’s interim president Sarah Feinberg said, “looking for the police to fine people. We‘re looking for compliance.”

MTA CEO and Chairman Pat Foye echoed this approach. “This is not about revenue,” he said, “and we have no interest in issuing fines and summonses.” Rather, MTA officials said, agency employees and cops will first request that maskless passengers don a proper face covering, and if these riders do not comply, they could face a $50 fine.

On the surface, this seems pretty straightforward: In an effort to drum up confidence in transit, whose reputation has unfairly taken a hit during the pandemic, the MTA is enforcing the state’s mask mandate. The health behind wearing masks is clear: They are one of the single best ways to protect yourself and other people from the spread of COVID-19, and the MTA, which has drawn criticism for resisting permitting its workers to wear masks early on during the pandemic, is trying to be responsible to the riding public and its workers as New York City reopens.

But the intricacies are worth probing because this appears to be a tacit attempt at luring Manhattan desk jockeys back to their offices. Time and again, surveys have indicated that transit rides are a point of contention. Even though sitting in an enclosed office for 8-10 hours a day is far riskier than the 25-35 minute subway rides people take to get there, New Yorkers seem to fear those subway rides – where socially distancing is tough, if not impossible – more than anything. They fear unmasked passengers; they fear buskers and candy sellers. They fear an environment they cannot control, and if even those fears aren’t borne out by the science of the pandemic, they are legitimate psychological fears that politicians and bureaucrats should attack. By mandating masks and making a show of enforcing the mandate, the governor is trying to negate those public fears – and perhaps generate a push to get people back to work. He should ride the trains too. “We have to be able to say to the riding public that everyone will be wearing masks,” Cuomo said, “and if they refuse to wear a mask they will be penalized.”

It’s not quite that easy though, and the pitfalls are obvious. For instance, in late August, when I took a 2 train from Grand Army Plaza to Borough Hall, every passenger on my train was properly masked, but when the doors opened at Atlantic Ave., two cops without masks were patrolling the platform. In fact, some of the most egregious mask violators in the city are cops. Pictures abound online of officers gathered without masks, and a Twitter account tracks those incidents. Mayor de Blasio routinely claims he has spoken with NYPD Commissioner Dermot Shea about mask compliance, but cops wear masks only for official press events (and even that’s not a given). Shea says his cops will be a part of the enforcement effort, but will they be wearing masks? MTA officials said only that they’ve requested as much from the police, but they have no authority here. Recently, I have seen an increase in masked cops in the subway, but they still seem to the most egregious and frequent offenders.

Me to one of them: “excuse me officer, are masks required on the subway?”

Officer [glaring at me, gritting his teeth; long pause]: “yes.”

The second issue concerns enforcement. When asked by Dave Colon of Streetsblog how the MTA planned to avoid targeting vulnerable communities, Foye said he disputed the premise of the question and declined to offer an answer. Will the enforcement effort focus on everyone? Will the cops target minorities as they often do with quality-of-life enforcement in New York City? Or will the cops pull back when video emerges of an escalated altercation as happened in the spring? Policing transit spaces in New York remains a prickly subject, and tensions are high.

Ultimately, as ridership inches toward 1.7 million per day, still just 31 percent of a normal weekday in 2019, and city politicians and business leaders make more noise about getting office workers back to their desks, comfort with transit will become a key issue. That’s why Cuomo and the MTA are going to enforce this mask mandate. Whether this leads to better compliance with public health orders or more flashpoints between the cops and New York’s citizens is an open question, but persuasion first and fines only after refusals is the path to follow. The MTA and the cops instructed to serve as enforcers should adhere to this approach carefully, and politicians should show their faith in the system by making a show of riding. Otherwise, transit will stagnant amidst public health concerns, and the city’s recovery will be that much slower.

I’ve been working from home since March, and in July I decided to use a 30-day card I had lying around to change up my exercise routine. I took a Brighton train north from my home station in southern Brooklyn around 6 PM each day and then a long walk back home. Anyway, the mask compliance I observed was absolutely terrible and seemed to diminish by the day. By the end, it seemed close to 50-50. Worse, in the casual off-peak atmosphere there were maskless people traveling in groups talking loudly (also solo travelers doing the same into their smartphones), an effective way to spread the virus. Maybe peak riders are better behaved and contribute heavily to the 90% figure the MTA came up with, but from what I’ve seen personally, enforcement is sorely needed.

My guess is that the compliance rate varies drastically by neighborhood and time of day.

I disagree. I think sitting for 8-10 hours in a well-ventilated office, working with the same relatively small group of people every day is a far lower risk than being crammed in with a ton of people, potentially dozens of them within a small subway car, for two 30 min rides a day. Keep in mind that each of those 30 min rides would also be largely comprised of a different set of people, further contributing to the risk. Frankly I think you’re being a bit tendentious here Ben, but I guess that’s part of the reason we come here, for pro-transit coverage.

Ben is a cheerleader for transit, but he’s not speaking from ignorance. There have been studies from public health agencies around the world that indicate prolonged office time is a significantly higher risk than transit. Most offices aren’t well-ventilated. Most transit is short-term with significantly more air replacement than offices.

On the office front, newer buildings have better HVAC systems, but those built prior to the 1990’s may need some degree of retrofitting to bring them up to current standards. Some structures of the late 1960’s thru the 1980’s may not have operable windows & that’s a serious problem considering what we are dealing with at the moment & if that is a reason not to go back to the office, it’s understandable. I do know of a few 1960’s era office buildings in White plains like that.

You’ve got it backwards: the longer people are required to wear masks, the longer people will feel unsafe on the subway. Someone who is thinking of going back to work in an office (someone who has that luxury, the sort of rider the MTA is desperate to lure back) is going to see a news photo of a car filled with masked riders and think “it’s not safe to come back yet”. The governor and mayor) have been so effective in scaring so much of the population into thinking that COVID is deadly (which, if you’re under the age of 75, just isn’t true), that trying to sound any kind of “all clear” is going to be impossible. Can anyone think of what kind of PR campaign the governor could launch to tell people it’s safe again? His credibility is as dead as the thousands of seniors he killed with his temper tantrum back in March. The mayor won’t even bring his own employees back to the office. How are they going to convince the private sector office workers to come back?

You’ve also got it backwards when you think that COVID is the main reason people are scared to come back to the subway. It’s crime, not the virus, that people are worried about. Every day brings a new story of chaos and violence during daylight hours on the subway. Even someone who thinks that masks are the answer isn’t going to feel safe knowing that someone got shot on the 4/5/6 platform at Grand Central one morning.

This is probably the stupidest thing I’ve ever read.