This story was originally published on June 21, 2020 by THE CITY. Sign up here to get the latest stories from THE CITY delivered to you each morning. Jose Martinez and THE CITY have since published a follow-up after MTA officials warned of “financial calamity” as federal bailout money is set to dry up in July and ridership remains just 20% of normal.

The transit agency has fallen short by hundreds of millions of dollars in projected income from the dedicated taxes and subsidies that account for almost half of its nearly $17 billion annual operating budget, according to MTA records reviewed by THE CITY. But even as up to 300,000 people return to work Monday for the second phase of the city’s “reopening” — likely pushing daily ridership past the one-million mark for the first time since March 20 —  MTA officials this week are expected to declare the agency is nearing financial ruin and in need of a bailout.

“The MTA has gone broke literally saving New York and it needs federal funds,” said Lisa Daglian, executive director of the Permanent Citizens Advisory Committee to the MTA. “The economy can only come back when transit comes back.”

The funding through May 2020 has come up short from a variety of sources, records show. Those include:

Those grim figures are on top of farebox revenue that, according to preliminary figures, last month generated just $53 million — or 86% less than the $343 million that had been projected at the beginning of the year by the MTA, which pinned the shortfall on state travel restrictions put in place to combat the COVID-19 pandemic.

On June 17, the last day for which MTA ridership figures are available, there were nearly 945,000 passengers in the subways and close to 975,000 on the buses. Prior to the pandemic, there were typically more than 7 million riders on weekdays. 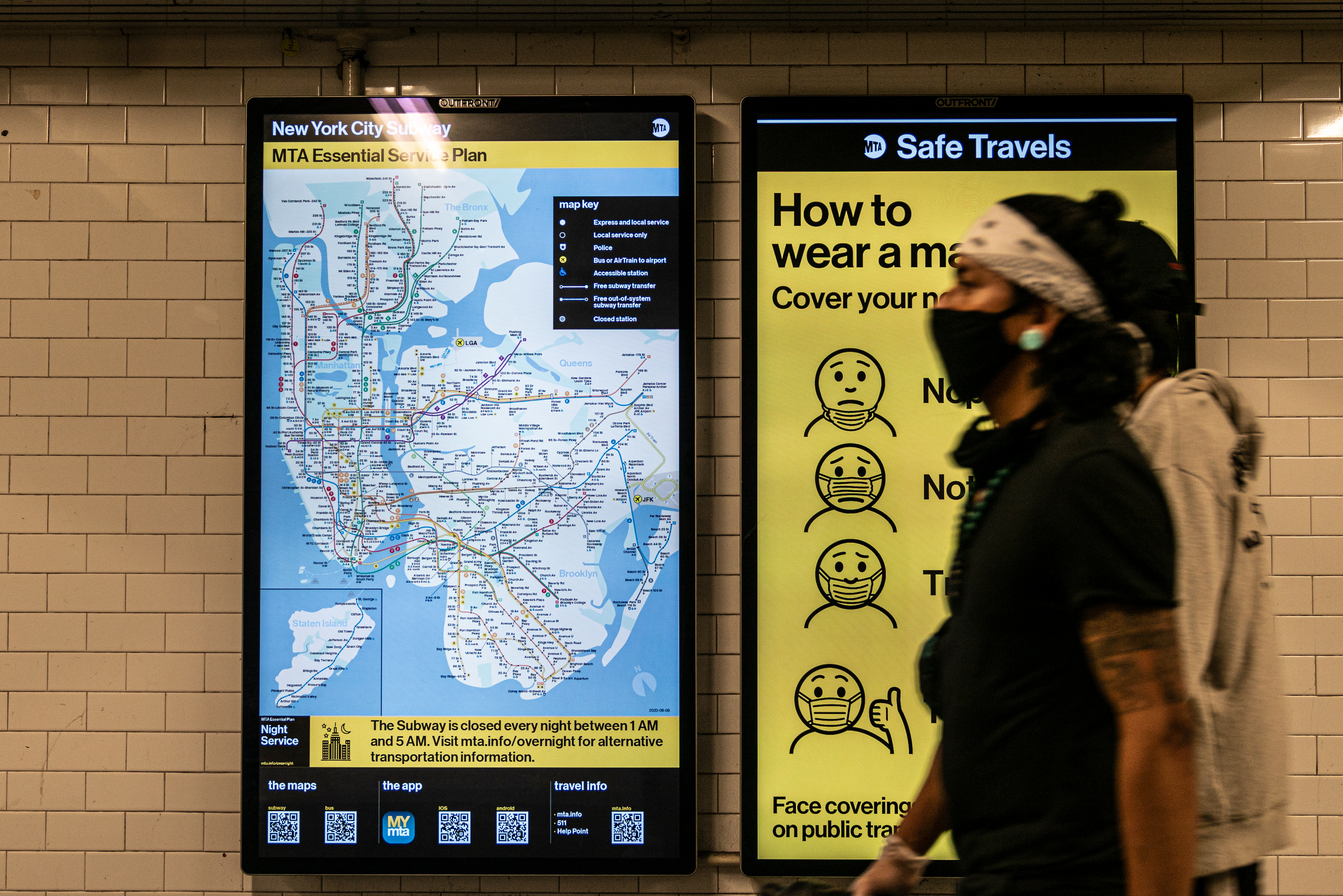 Riders walk past a “how to wear a mask” MTA sign at the Times Square station on June 10, 2020. (Hiram Alejandro Durán/THE CITY)

Bridge and tunnel revenues at the nine crossings controlled by the agency have also taken a hit, with the revenue for April coming in at $73.5 million dollars — $104 million less than what had been forecast by the MTA. “It’s a serious cash-flow problem — everybody knows they’re not getting the money from the ridership,” said Rachael Fauss, a research analyst with Reinvent Albany, a watchdog group.

The numbers became public as MTA officials prepared to issue a bleak financial forecast at the agency’s Wednesday board meeting, where they will again make the case for another $3.9 billion in emergency federal funding. In March, as the pandemic began to clobber its finances, the MTA secured a $3.9 billion dollar commitment in emergency federal funding. That money arrived last month, but advocates say it will only go so far.

The Regional Plan Association has raised the possibility of a $9 base subway and bus fare to fill an enormous budget gap. MTA board members warned that the return of riders to the transit system could be short-circuited if more drastic measures are needed to stem the financial losses. “If the MTA starts to talk about service cuts, they will lose the trust of New Yorkers forever,” said John Samuelsen, an MTA board member and international president of the Transport Workers Union.

The transit agency must also contend with how to pay for cleaning costs that have surged during the pandemic and the indefinite nightly shutdown of the subway from 1 a.m. to 5 a.m. “I would rather see additional funding such as a gasoline tax of two, three cents, instead of service cuts,”  said Andrew Albert, an MTA board member who represents the New York City Transit Riders Council. “It wouldn’t even be felt, but it would bring in much-needed money into the coffers.”

THE CITY is an independent, nonprofit news outlet dedicated to hard-hitting reporting that serves the people of New York.