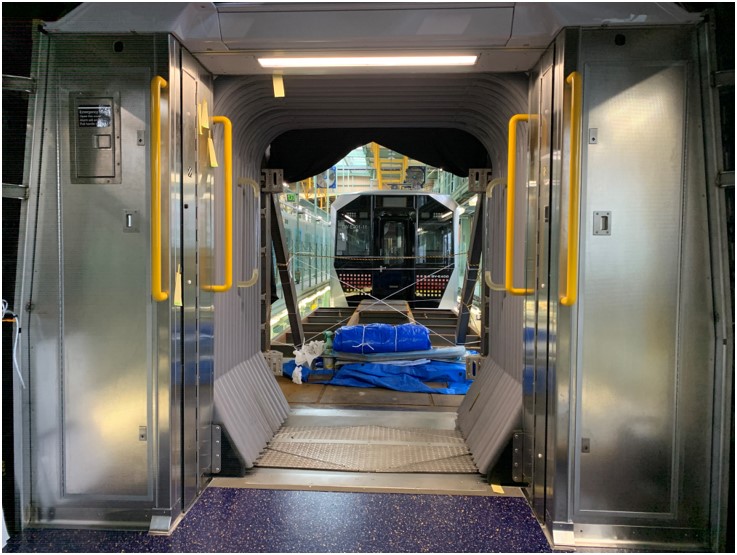 The R211 open gangway test train, shown here under construction, could become the model for all future NYC subway cars. (Photo via MTA)

After years of debate and an upcoming two-train R211 pilot program, the MTA is set to embrace open gangway subway cars in a big way next week when the MTA Board votes to begin the procurement process for contract R-34262. More commonly known as the R262 contract, this order of over 1360 new subway cars for the A division will replace the R62 and R62A cars currently in use on the 1, 3 and 6 lines and the 42nd St. Shuttle, and the entire order will feature open gangways, connecting five-car sets and increasing capacity on each train by around 8-10 percent.

The open gangways aren’t the only part of the R262 cars that look toward a future with more capacity. The R262s will also be fully equipped with CBTC capabilities, a key element of the plans to resignal the subways and increase throughput on, notably, the Lexington Ave. line. As the MTA Board summary notes, the R262s will replace 1139 R62 and R62A cars, and if the MTA opts to exercise both options for all 1364 of the 51-foot-long cars, the A Division fleet will grow by 225 cars or up to 22 more trains.

It’s far too early to know how the MTA plans to deploy these cars. After all, delivery on the first of the R262s isn’t expected until 2024, and the successful CBTC build-out is years as well. For now, the Board materials simply state that the increased fleet size will “support ridership growth as well as other operational needs.”

In fact, the issue under review by the Board isn’t yet the actual contract to build the R262s. The MTA is instead seeking permission to bypass the standard competitive bidding process and instead issue a competitive RFP. How “competitive” the bidding can really be one way or another is an open question I’ll return to shortly. As the staff summary prepared for the MTA Board said, normal competitive bidding isn’t appropriate for rail car procurement.

“Utilizing the RFP process will allow NYC Transit to select the proposal that offers the best overall value through negotiations and evaluation based on criteria that reflect the critical needs of NYC Transit,” read the staff summary. “More specifically, NYC Transit will be able to consider factors including: (1) the technical proposal, overall technical qualifications including the quality of product, experience of proposer, delivery schedule; (2) overall project cost and financial benefit to NYC Transit; and (3) other relevant matters.” MTA Board materials released last month included the first mock-ups of the R262s.

The Board had originally intended to vote on the request for an RFP last month, but the decision to embrace an all-open gangway design came as a surprise. Although the MTA Board has been a loud voice in the push for the agency to move to a standard open gangway design, MTA Board members told me that they were not aware of the shift in philosophy until handed the materials. They wanted more time to study the proposal and understand the move to open gangways, and they plan to vote on proposal next week.

Getting the MTA to follow a path forward on open gangways has been a near-Herculean effort spanning the better part of a decade. The agency’s 20-year assessment issued in 2013 identified articulated trains as a clear need, but over the next few years, a debate emerged as to whether NYC could handle open gangways both technically and practically. It always reeked of New York exceptionalism to me. Other cities that use open gangways have train routes that curve and buskers and beggars alike that roam the subways. The problems were of a fear of change and lack of creativity.

When Gov. Cuomo finally grew interested in the subways in mid-2016s, he embraced open gangways. By then, the agency had already indicated the R211s would include an open gangway prototype and an option to add around 700 open gangway cars, but Cuomo’s push and behind-the-scenes work by his Board appointees has led to an all-open gangway R262 order. It is years too late, and the delay essentially means that the NYC subways can’t feature 100% open gangways until the mid-2070s at the earliest. But it’s a positive step nonetheless.

Those R211 test cars, meanwhile, are inching ever closer to becoming a reality. The MTA unveiled new photographs of Kawasaki’s test cars under construction, and delivery is still scheduled for May of 2021. 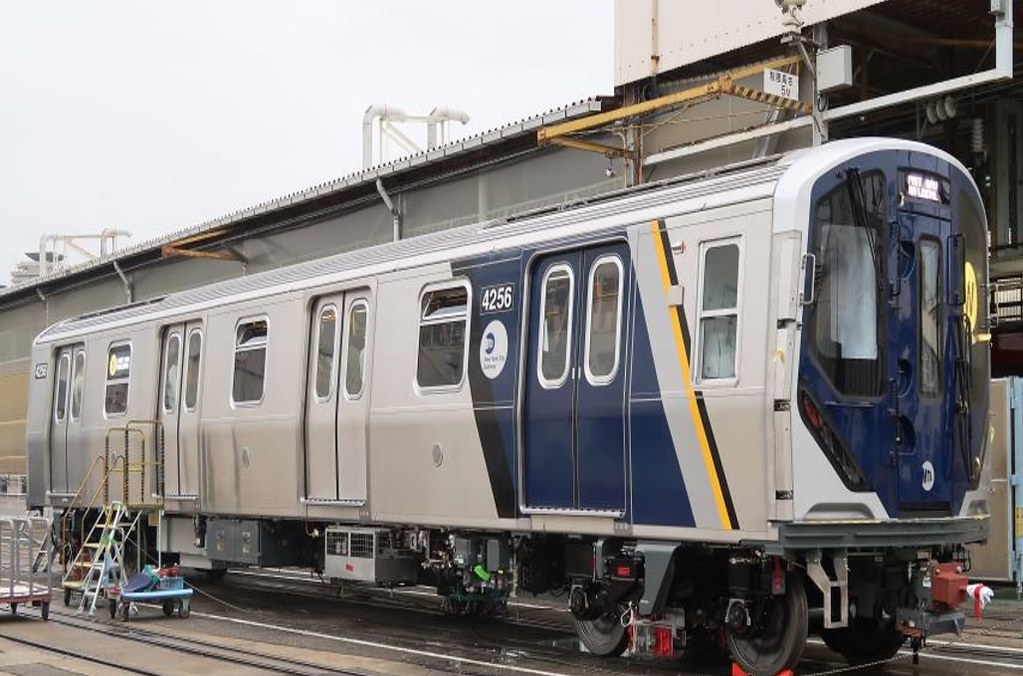 The R211, shown here under construction, will feature wider doors but fewer seats. The blue livery is the first addition of color to the rolling stock in decades. (Photo via MTA)

But with that future in sight, who will be around to build it? Alstom dropped a bombshell on the rolling stock industry this weekend as it announced a purchase of Bombardier Transportation, manufacturers of the problem-plagued R179s (and various other problem-plagued cars around the world). It’s not clear yet the extent of the penalties MTA intends to levy against Bombardier, but the new debarment regulations could disqualify Alstom, as Bombardier’s new owner, if Bombardier faces debarment.

Even without debarment, the Alstom takeover of Bombardier leaves Alstom and Kawasaki as the two remaining players in the New York City rolling stock world. Siemens could try to enter the market, and CRRC wants in, despite political concerns over Chinese government involvement in rail car manufacturing. Stadler has an increasingly presence in the U.S. as well, but whether they’re interested in New York remains to be seen.

No matter how it plays out, though, open gangways are finally on the horizon this time around as New York finally looks to catch up with the rest of the world.

A first glimpse at the MTA’s plans for...

As reported by France 24 and DW News, Alston / Bombradier is a straight 1-1 merger.

Given the number of buskers and beggers using the IRT and BMT lines now, open cars, unpoliced as the trains are presently, will offer a continuous stream of entertainment for riders.

It was just a matter of time until one of these types of comments would appear. Enough said.

Ben — Great article. Allow me to add didn’t the MTA Board just recently approve a $1.4 billion contract award to Kawasaki Rail Car for the purchase of 535 new subway cars? In most cases, funding for new subway cars is provided under grants to the MTA from the Federal Transit Administration. As you pointed out, there are now only two rail car manufacturers in the USA including Alstom and Kawasaki to supply transit agencies around the nation. As a result, there is limited competition between both. Who knows if Siemens will reenter the market. Federal Transit Administration and New York State Buy America requirements would make it difficult for the Chinese rail car manufacturer to enter the market. Don’t forget security concerns about the Chinese. The MTA, NYC Transit, LIRR & Metro North are competing against each other and transit agencies, who operate subway and or heavy commuter rail around the nation for time and space on the remaining two manufacturer’s production line. As a result, over past MTA Five Year Capital Programs, NYC Transit has averaged five years or more for new subway cars before entering revenue service. This process begins from the development of bid specifications, advertising and award. Next is vendor mobilization, pre-production, assembly, testing, delivery and acceptance from the first to the last subway, commuter rail car or bus. I would not bet on the MTA initiating a Request for Proposals with a contract award within twelve months. Ditto for delivery in 2024.

I thought the ban on CRRC and other Chinese railcar manufacturers was already a done deal?

Also, CAF, Kinki Sharyo, and Hitachi Italy (formerly Breda) are in the US railcar market. CAF has done heavy rail cars for the Washington Metro and Hitachi is working on a joint order for Baltimore and Miami.

No we don’t need to test first after all

@Larry, that’s not what he said at all about the rail car builders. He said there are two in New York City rolling stock world. There are plenty of others – not including CRRC – who can bid on the R262s if neither Alstom nor Kawasaki can. Siemens have not exited the US market as far as I’ve heard. Have they finished working on their diesel locomotive order for Amtrak? Stadtler won the contract to build new rail cars for MARTA in Atlanta and Hitachi are working on building new cars for Miami-Dade Transit (not sure if Baltimore’s MTA will join in or not, like they did with the Budd cars). CAF, which has a plant in Elmira, NY, is another option. The point is, there are other options. And who’s to say that MTA will bar Alstom from bidding because they acquired Bombardier?

….. you do understand the tiny obscure itty bitty little PATH has more passengers than Atlanta and Miami’s is even less?

Here is a critical challenge facing the MTA when using Federal Transit Administration funding to pay for subway or commuter rail car procurements. FTA requires that all capital procurements meet FTA’s Buy America requirements (49 U.S.C. 5323(j)) which require all iron, steel, or manufactured products be produced in the United States. Federal public transportation law provides for a phased increase in the domestic content for rolling stock between FY 2016 and FY 2020. For FY 2020 and beyond, the cost of components and subcomponents produced in the United States must be more than 70 percent of the cost of all components. There is no change to the requirement that final assembly of rolling stock must occur in the United States. FTA issued guidance on the implementation of the phased increase in domestic content on September 1, 2016 (81 FR 60278). Applicants should read the policy guidance carefully to determine the applicable domestic content requirement for their projects. Any proposal that will require a waiver must identify the items for which a waiver will be sought in the application. Applicants should not proceed with the expectation that waivers will be granted.
Consistent with Executive Order 13858 Strengthening Buy-American Preferences for Infrastructure Projects, signed by President Trump on January 31, 2019, applicants should maximize the use of goods, products, and materials produced in the United States, in Federal procurements and through the terms and conditions of Federal financial assistance awards.

Simple question about the new order. Will the door positions be the same as for the R-142s, allowing partial walls to be built to reduce the surface area where people can fall or be pushed to the tracks?

Second question. Since the debt used to purchase the R62s was refinanced into 50 year bonds, how the hell can the MTA be planning to replace them before 50 years is up?

Answer 2… one can refi long-term debt until told otherwise & FYI if the R-62 fleet needs replacing, then why wait.

As I noted here recently, it’s time to replace all fleet types prior to the R-142 as they don’t meet ADA guidelines especially involving audio announcements.