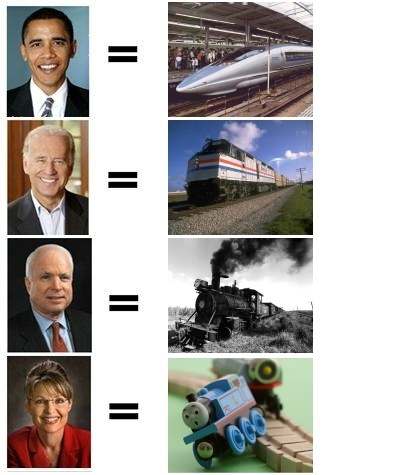 Over the last few weeks, the rather amusing image, at right, from the Daily Kos has made the rounds online. While it’s mostly funny for its portrayal of Sarah Palin as a derailed Thomas The Tank Engine, the image has more than a bit of truth about it when it comes to the presidential candidates and their public transit policies.

To wit, we have a story out of the Washington Post about John McCain’s love — or lack thereof — of public transit. Earlier this week, in the midst of a funding crisis for DC’s WMATA, McCain made a point to vote against a bill that would have provided fiscal relief for the rather beleaguered system affectionately termed America’s Subway by those in the District. Michael Laris reported:

McCain was also one of two dozen senators who voted last week against a bill that included [Congressman Tom] Davis’s proposal to authorize $1.5 billion in dedicated funding to Metro over 10 years. The provision was part of broader rail safety and Amtrak funding legislation.

Davis said that he was disappointed with McCain’s vote but that he thinks McCain’s opposition was directed more at Amtrak.

A statement from the McCain campaign, however, targeted the Metro funding as well as Amtrak. “Senator McCain strongly objects to earmarks in the bill such as a $1.5 billion earmark for the Washington . . . Metro system and questions if this money is warranted above the needs that may exist among other mass transit systems in our country,” the statement says. “With the serious financial situation facing our nation, this [multibillion-dollar] commitment of taxpayers’ dollars can [be] dedicated to addressing far more important national priorities.”

From the campaign’s statement alone, it’s clear that John McCain simply doesn’t understand the role transit plays in our national economy. It’s not a stretch to say that New York City and Washington, DC, are such vital, important cities because of their transit networks. If bankers in New York had to drive into the Big Apple everyday and couldn’t enjoy Metro-North, the Long Island Rail Road or New York City Transit, New York just wouldn’t be a financial hub. The same holds for DC.

A few weeks ago, City Hall, a monthly focused on New York politics, called for a national transit bailout. John McCain would rather bailout everything else other than transit, and as we know, without investment in infrastructure, the rest of the economy will suffer.

I hate to bring partisan politics into this blog too often. By it’s very nature, it’s a partisan site in favor of pro-transit investment that should pressure drivers to avoid unnecessary car rides. But right now, it’s safe to say that if transit is a key issue for any voter in this campaign — and considering the state of the MTA, New Yorkers should focus on this — John McCain is not the right candidate for the job.

We need proactive solutions to our transit funding problems. The WMATA and the MTA play too vital a role in our country and are in too deep a hole to get out on their own.

If this is really the logic:

“Senator McCain strongly objects to earmarks in the bill such as a $1.5 billion earmark for the Washington . . . Metro system and questions if this money is warranted above the needs that may exist among other mass transit systems in our country,”

…then it’s more prioritizing Washington’s Metro over other american metro systems, which is actually sort of a good point. Washington definitely has the all-around best Metro system in the country (although of course San Francisco and New York are exceptional in certain unique ways), and I think that’s a direct result of them having a disproportionate amount of Federal interest relative to other systems.

That said, of course it’s ridiculous to be against the Feds funding it. Most transit systems are funded by their state, and in DC the ‘state’ is the Feds. Also it sounds to me like John McCain is actually a proponent of not having the feds fund transit at all, rather than funding transit adequately and equally throughout the country.

It’s not a stretch to say that New York City and Washington, DC, are such vital, important cities because of their transit networks.

Except that DC’s importance has grown with the size of the federal government for decades, long before the Metro.

If bankers in New York had to drive into the Big Apple everyday and couldn’t enjoy Metro-North, the Long Island Rail Road or New York City Transit, New York just wouldn’t be a financial hub.

“Why not? Auto-oriented cities can be financial hubs just like transit-oriented ones. ”

Not really. LA is certainly not a financial hub, and neither is Houston — being business hubs is not the same as being financial hubs. Charlotte is admittedly the home of banking HQs but most actual operations are located, you guessed it, elsewhere: Bank of America has a bigger presence in transit-oriented San Francisco than in Charlotte. And Charlotte just started transit-building. Chicago may not be transit-oriented, but oddly enough the *financial district* of Chicago — the Loop — most certainly is transit-oriented.