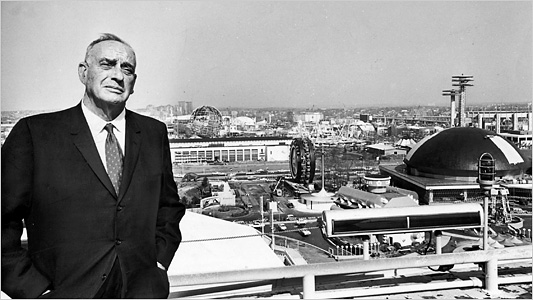 New York is still coming to grips with the legacy of Robert Moses.

Oh, what a tortured web transit policy weaves, and this web will just get more expensive if New York doesn’t find a way to better bail out the MTA.

According to a report released on Tuesday by the Independent Budget Office, subway fares could reach $2.50 per ride with Unlimited Ride cards at $104 if the MTA doesn’t see some alternate revenue streams. The report is available as a PDF, and William Neuman summarized the news:

Because ridership often tends to drop after a fare increase, the study predicted that the authority would have to increase fares by 28 percent to achieve the desired 23 percent rise in the total revenue that fares produce. Under that formula, the 30-day unlimited ride MetroCard would rise to $104, from $81. A weekly MetroCard would rise to $32, from $25.

The study predicted that the base subway and bus fare would increase to $2.50, from $2. That is an increase of 25 percent, but the authority has said that it prefers to increase the base fare by multiples of 25 cents because its vending machines are set up mainly to handle quarters.

In contrast, the rescue plan proposed by the state commission, which is headed by Richard Ravitch, a former authority chairman, calls for an 8 percent increase in total fare revenue.

As the Daily News had reported about a $3 base fare a few weeks under the MTA’s so-called Doomsday Scenario, this IBO analysis is hardly surprising. But it does drive home the point of the Ravitch Report. Unless New York officials get serious, the MTA’s $1.2 billion financial burden will fall squarely on the shoulders of the riders through fare hikes and service cuts. To avoid that, I would opt for those controversial East River bridge tolls.

The point, however, may be a moot one, as Sam Roberts appropriate wrote in The Times on Monday, power brokers are tough to find these days. Roberts, in a well-written piece, hits upon the Robert Moses problem. New York City — and in particular, its transit system — needs a Robert Moses. But after the experiences and horrors of later-years Moses, the city just doesn’t want one.

Roberts wonders if Ravitch can be that power broker. As an appointee of the governor, he is in a similar position as Moses was all those years ago. But unlike Moses, Ravitch has no real power. He has the authority to lead a commission but no authority to do anything with the recommendations. Power in New York is just too fractured to allow a consolidation we would need to see a revolutionary solution to the MTA’s financial woes.

Robert Caro, the author of The Power Broker, the excellent Moses biography, had the final word. “It’s not a lack of power,” he said to Roberts. “It’s a lack of vision — of a vast metropolitan area as a single whole and what is necessary to tie that area together in a way that makes every segment of the population one. There are public officials with plenty of power. That power is just never thrown behind mass transit in the way it should be.”

Sadly, that sounds true to me.

It’s a lack of vision — of a vast metropolitan area as a single whole and what is necessary to tie that area together in a way that makes every segment of the population one. There are public officials with plenty of power. That power is just never thrown behind mass transit in the way it should be.

Yes, but power was thrown behind mass transit when the subways were built in the first place. It was Moses who persuaded city and state officials to shift their focus to the automobile. Had Moses’ vision been different, the outcome would have been different too. What made Moses successful was not just his vision (which turned out to be the wrong one), but also an extraordinary command of the levers of power, coupled with the ability to Get Things Done when those levers were put into his hands.

Two things have changed since the Moses era, besides lack of vision. Most people no longer trust government to run big projects. And people with power can no longer ram big projects through with little to no oversight. These days, Moses himself would have a lot more trouble getting his projects done.

Everyone likes authoritarian thugs when he agrees with their principles…

Wouldn’t it make more sense to address the transparency issue first and then worry about how much money the MTA needs, and then how it is to be raised? It’s very hard to bail out a sinking boat when your buckets have giant holes in them.

I agree that officials have plenty of power, and I also agree that most people don’t trust government to handle big projects. They’re not mutually exclusive, they’re almost always hand-in-hand!

Weren’t we talking about the MTA holding up a $1 BILLION windfall just a month ago? What happened there?

[…] the past, I’ve called for a Robert Moses-type figure to lead the city’s much-needed transit revolution. I’m almost on board with […]