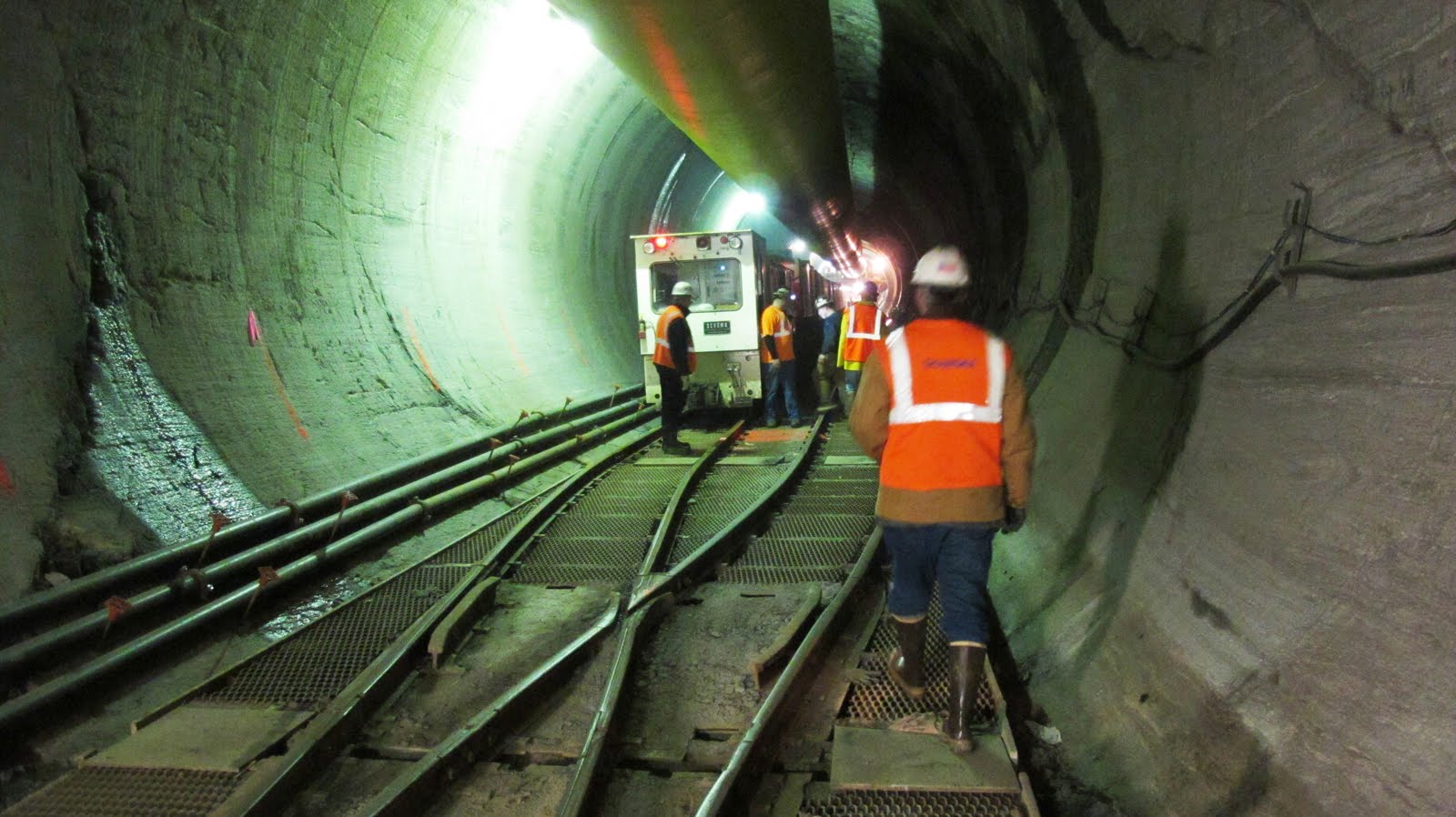 A glimpse inside the western tunnel under Second Ave. This shot, taken at around 80th St., shows the muck train engine. (Photo courtesy of The Launch Box)

Updated (2:28 p.m.): Just yesterday I reported that the tunnel-boring machine was approaching the end of its western run, and today, the MTA announced that ADI, the TBM digging out the long-awaited Second Ave. Subway, reached that terminus over the weekend. Ben Heckscher at The Launch Box reports that the run was completed at 4:30 a.m. on Saturday morning. The construction crews will now disassemble the TBM, pull it back out along the tunnel and reassemble it in the launch box for another run down Second Ave. The authority hopes to start digging the eastern tunnel by April with an estimated completion date by the end of 2011.

“Construction of this much-needed subway continues to move forward and this week marks another major accomplishment to transform New York as we know it,” MTA Capital Construction President Michael Horodniceanu said in a statement. “These are tangible results that will not only expand our capacity but will also bring new economic activity and growth to Manhattan’s Upper East Side and points beyond.”

During the western run, the TBM dug 7162 feet down Second Ave. but did not reach the existing tunnel at 63rd St. due to a curve too sharp for the TBM’s turning radius. The two tubes will be connected by blasting and digging work set to be done by the company tasked with building the 72nd St. station. The eastern run of the TBM will end at 63rd St. though because the curve from 63rd St. and Third Ave. to the straight shot up Second Ave. is shallow enough for the TBM to make it.

Of course, once the TBM runs are finished later this year, the hard work will only just begin. There is, after all, a reason why the Second Ave. Subway isn’t slated to open until nearly five years after the tunnel-boring machiens are through. Work crews will have to begin the arduous process of building out station caverns and modernized subway stations, constructing ancillary buildings and finishing the tunnels themselves. The completion of the first TBM is a major milestone for a project that has come to symbolize governmental inaction and ineptness over the past eight decades, but it is a small step on the way toward a new subway line.

Meanwhile, The Launch Box has some stunning photos inside the the western tunnel. Take a look at Part 1 and Part 2. The shots show the detail of the tunneling work, sandhogs working near the TBM cutter head and the muck produced by Adi as she heads south. These are truly stunning shots. 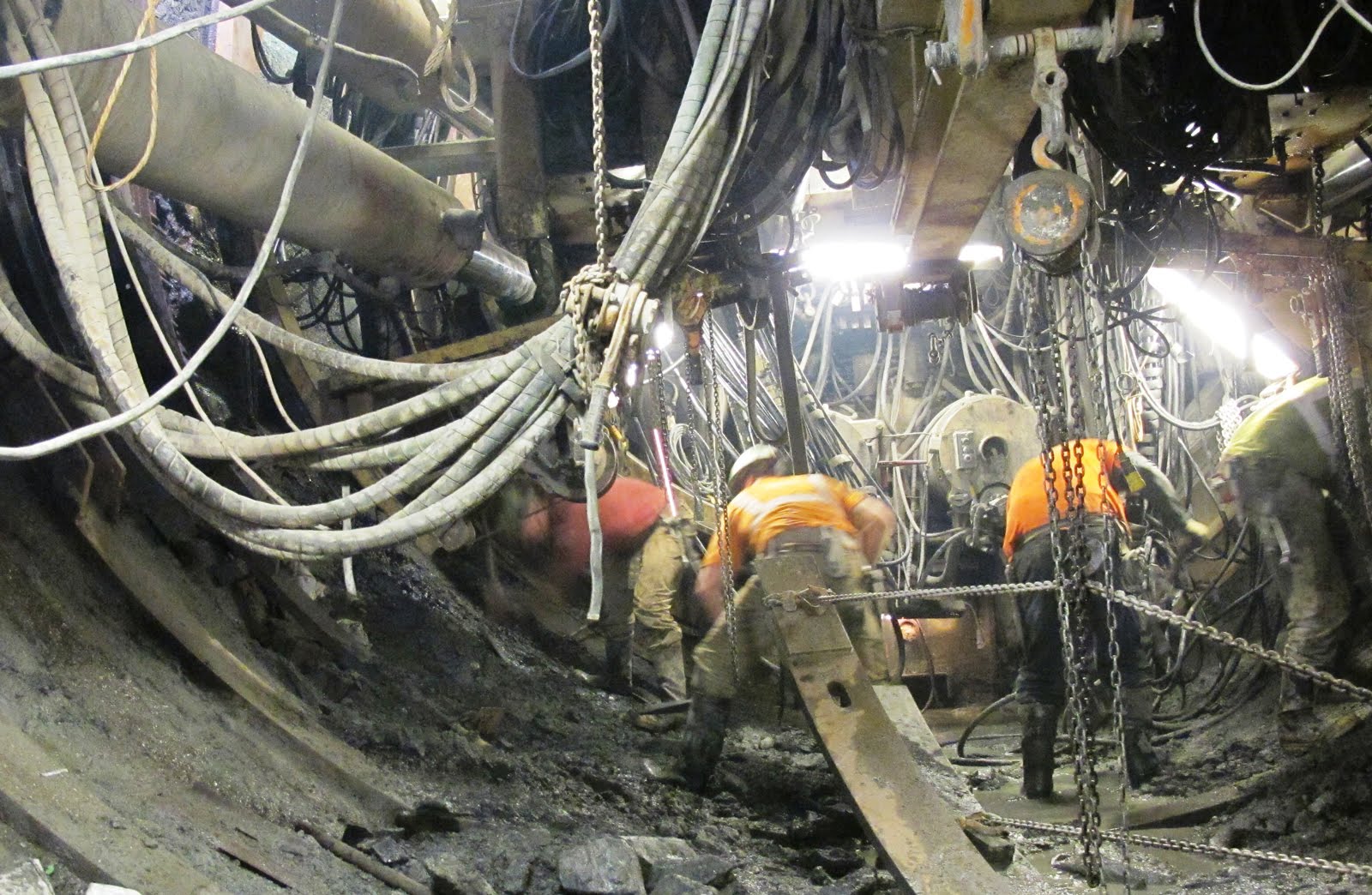 Sandhogs work behind the TBM to clear out loose debris. The machine is not in motion. (Photo courtesy of The Launch Box)

Should’ve ran it all the way to Houston!
But in all seriousness this is a huge step forward. Certainly the biggest milestone since the completion of the launch box.

Thats what I also say Hank. Doesnt the MTA know how to multitask?

I understand this part of the digging. They now need to get Tunnel 2 dug.

Now go forward to when both tunnels are finished in 2011. Why does the tunnel boring crew have to stop and wait for the stations to be built before continuing? Why wait until Phase 1 is complete to continue digging? If the actual tunnel is done, get that tunnel digging crew to keep digging northbound or southbound. (Dependent on Phase) Get a different construction crew to construct the subway. When the crews are done building the subway structures, hopefully the crews that have been boring the new tunnels will be close to done and then we will have a whole new section of tunnel that needs to be outfitted. No need to wait 2-3 years for a new tunnel to be built. Is this concept that difficult for them to do?

If I worked like this on my job I would be fired.

Mostly it’s a cost issue. That’s why they can’t keep sending the TBM southward down Second Ave. They haven’t done the prep work and don’t have the money budgeted for it right now.

Curious, is the cost issue a result of a lack of forthcoming federal funds?
Noticed the wikipedia entry for SAS shows federal funding for only Phase I. Like others have stated it’s too bad the lines themselves couldn’t be bored because (1) it saves time, and (2) its less likely that we’ll end up with a rump SAS this way.
Hopefully, this phasing thing will allow three or maybe even four tracks in phase I and II if we get state and local leaders who have more of a long-term vision.

Yep. There are no funds for phase II or III or IV yet. 🙁

There is also the schedule to follow, and the fact that they’re doing 2 tunnels with 1 machine. Since there’s no through boring that might happen with a circular route, they need to stop and go back to start on the second tunnel. This also may be why they didn’t install prefabricated tunnel lining panels as they bored the tunnel, and are pouring the concrete into forms after the fact.

It does seem wasteful to not bore the entire tunnel from 125th to Hanover Sq in one run.

Does this mean each phase will need its own launch box? It seemed like it took them 2 years to excavate the current launch box.

The stations are the most expensive parts anyway.

They could go with cut and cover for Phase 4. A shallow option Phase 4 demands cut and cover, while the deep option would be a difficult task for a TBM due to soft soil and existing subway lines. Phase 4 deep option definitely needs its own launch box, due to soft glacial till and landfill soil conditions south of 14th st. Down there you need a EPBM TBM (Earth Pressure Balance Machine), not the current hard rock TBM. The existing completed sections and shallow depth of Phase 2 lends itself to cut and cover methods. There, the short lengths and existing tunnels’ rectangular cross-sections make it uneconomical to use TBM’s.

Al thanks for the info.
2 follow-up questions:

A) Why are they using a TBM for 5 blocks of Phase 2 then? Why not just cut and cover?

B) So, if Phase 4 is pretty much req’d to be cut and cover, could the current TBM cut all of Phase 3 from its current launch box?

Good question — are you sure they’re using a TBM for any of phase II? It doesn’t seem like it.

To answer B, yes, the TBM could cut all of phase 3 from the launch box, but (1) phase 3 isn’t funded, (2) due to the need for a muck removal tunnel it would be impossible to put the track and stations into phase 2 while boring phase 3, unless a new staging site was built.

I saw the pic and the first thing I could think of was “wow pretty”.

I am a big fan of the start it and hit a milestone and it becomes much harder to stop. That is why they need to get their feet in the ground on CAHSR too.

But good job on tube one.

I understand why they’re not tunneling further south right now. But it seems like whoever is going to be tasked with completing this segment of tunnel, including the westward curve at 63rd St., should also create the stubs of tunnels continuing south along 2nd Ave., past the curve. Otherwise it will be difficult to create those tunnels later without taking the line out of service.

This point has occurred to me, also!

Do you know anything about thia point?
Are they really going to let the new tunnels merge smoothly into the existing 63rd St. tunnel, instead of boring at least the STUBS of a southbound continuation under Second Ave.?

I believe they have to build the stub, but I’m not entirely sure. I’ll try to look into it.

I’d guess the bellmouths would be mined by drill-and-blast, TBMs aren’t that good at splits and merges.

Speaking of tunnels, I notice that Alt G Lives! … sort of, with a new name and a price tag of $13.5 billion that’s still going to cause problems. But at least the line goes to Penn Station and is a multi-state project.

Those acronyms sometimes drive me nuts.
WHAT is CAHSR?

California High Speed Rail. It’s the first hit when you stick it in Google too. 🙂

[…] tunnel boring machine hard at work beneath Second Ave., reached the end of its western end, the MTA rightly celebrated. For a project that’s been decades in the making, the end of a TBM run is cause for […]