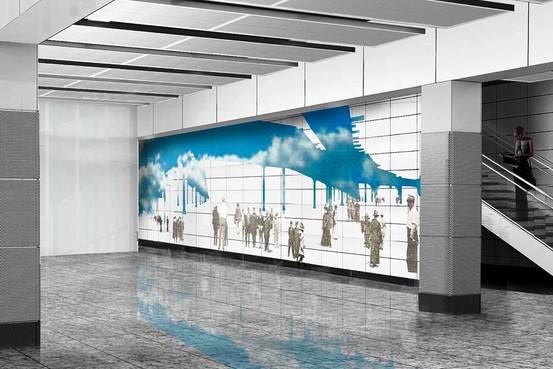 I’ve been sitting on this one for a couple of weeks, but it’s still timely. A few weeks ago in The Wall Street Journal, Jennifer Maloney profiled my favorite under-the-radar MTA department. She highlighted the upcoming plans for art installations at the MTA’s new stations. Along the 7 line extension and underneath Second Ave., the authority will soon have four blank canvases, and they’re planning new art for each station.

As subway riders descend the escalator into a new 7 line station near 10th Avenue and 34th Street in 2013, they will be followed by a mosaic of brightly colored celestial orbs shining from a deep blue sky. At a planned Second Avenue subway stop at 63rd Street, the walls will display photographs evoking the elevated trains that once rumbled above. And a station at 96th Street will feature line drawings fired onto ceramic tiles, playing with perspectives as travelers move through the space.

The designs are part of the Metropolitan Transportation Authority’s plan to make each of its new subway stations on the extended 7 line and new Second Avenue line a massive work of public art. Building on the MTA’s nearly three-decade history of enlivening subway and commuter rail stations with mosaics and sculpture, the agency has commissioned art that accompanies riders from the sidewalk to the platform and helps shape spaces that haven’t yet been built.

The effort is ongoing: The MTA last week issued a call for artists for the Second Avenue line’s 72nd Street station. “It’s very exciting,” said Sandra Bloodworth, director of the MTA’s Arts for Transit and Urban Design program, who, along with the artists, discussed details of the projects for the first time. “It’s three New Yorkers, three visions. I think that reflects the subway; it reflects our ridership.”

As Maloney notes, the MTA allocates a small portion of the construction costs to artwork. The new installations are expected to cost between $900,000 and a $1 million each and are a part of projects that will cost a few billion dollars each. It’s a great program that livens up the subways, turning them into the city’s most extensive art gallery. Check out Maloney’s piece for more renderings of the upcoming art. Jean Shin’s work at 63rd St., which, according to Maloney, will “depict the 1942 dismantling of the Second Avenue elevated line and the opening of the sky over an area accustomed to rumbling and shadows,” sounds particularly intriguing.

Isn’t this a perfect example of why it costs so much to build these stations? Don’t get me wrong, I love having a unique station with art to let me know where I am. But $1m a pop? We could be saving a lot of money by stripping down these station designs (well, maybe not as much as the South Ferry station).

Considering how these stations cost hundreds of millions of dollars, spending less than 1 percent of the budget on beautification efforts seems reasonable to me. It’s better than a drab, white-on-white space, no? That was the point I made yesterday.

I think you picked the wrong station to make that point. The new South Ferry station has interpretive displays, art and showcases some of the artifacts recovered in excavating the footprint. Showing a photo of white tile meakes a point, but it’s not a very accurate view of what you’d experience walking into the place. Also, to be honest the old city hall station may be pretty, but it’s also a bit dark and cramped, at least from the photo.

I agree that a small percentage devoted to beautification is money well spent. Even without it though with a modern design you’ll have a more airy space with wider platforms which will be more pleasant.

Vanshnookenraggen, your are NOT a genius!
And whatever MTA lifer chose this “art” is also pathetic. Sandhogs make don’t make the best art experts.
This subway will NEVER get finished, guaranteed.

Meanwhile, the station will smell like piss about three weeks after it opens because there will be no money to pay someone to hose down the platform.

What does “hose down the platform” mean?

I know it’s been 20 years since any platform has been hosed down, but it’s pretty self-explanatory. You take a hose, (hopefully one connected to a water supply) and let ‘er rip. Washes all the piss, shit and God knows what else is on platforms into the track-level drains.

I somehow think that what he really meant by that question was that “That’s the trouble”. The bums and junkies are creating the stench by “hosing down” the subway stations.

Think about that. The line closed in 1942. Most of the people old enough to even have a say in the matter at that time are gone, perhaps with a few surviving. I imagine the majority of those whom remember the IRT Second Avenue El were children at the time.

Point: Don’t destroy infrastructure until the replacement is built and functioning as planned.

In ’42, when the 2nd Ave El came down, I believe there were plans on the books to build a new subway, but then the war came and every loose piece of metal went there. After the war, Robert Moses and his expressways and anti-mass transit mantra were in full flower. Still were in ’55, when the 3rd Ave El came down. After the war it seems subway construction was passe and the combustion engine was the way you were supposed to travel.

The money raised from the sale of bonds in the late 1940s for SAS construction was diverted to maintaining the existing system – including buying several thousand new subway cars, replacing cars dating back to 1904-1920.

Like I said in yesterday’s post, given the costs already in the project, if they just borrowed some of Squire J. Vickers more colorful BMT mosaic designs and used that as the template for the platform levels on the new Second Avenue stations, I’d be fine with that. It wouldn’t scream out to the world how modern/clever the folks at the MTA are, but it would cost less and we already know the stuff holds up 80-90 years. The station designs and pre-1990s remodelings the TA/MTA have come up with since the mid-1950s have been at best, hit and miss, with the “miss” category well in the lead.

It probably would cost even more millions to lay in Vickers’ system of tiles and mosaics, which is what I’d prefer…

It might be cheaper if they used the method done with the Brooklyn Bridge station rehab of prefab tile sections hung on the wall. That way the main work is done elsehwere and then just fastened in place (and if they want to do something a little more unique/modern at the mezzanine level, that’s fine. That will be mainly for the people using the station in the specific neighborhood, as opposed to platform level where people passing through on the trains will see whatever’s done, and if the design ages badly like most post-55 designs have, it’s going to just come across as another MTA mis-fire for everyone to see).

Personally I think Moscow is leaving us in the dust here… but it’s not bad. It is money well spent.

Not sure any of this qualifies as art. Why not use some beautiful old black and white photos from each area, blown up to mural size. Would be cheaper as well.

Look forward to frequent, reliable train service. Screw the art! If you can’t provide acceptable service all the art in the greatest museums in the world won’t make it worth the fare you’re paying.

Especially when the area around the artwork smells like piss.

“Hey honey, look at this lovely mural on the wall over…what the hell is that smell?”

“Honey, that’s just the normal piss smell. You’ll get used to it.”

Ah what, moved here from Texas, and not used to NYC? Get over it.

It wasn’t until people said “enough” to bullshit like that that things started to turn around. I’d love to ride a subway one day and not smell piss is all.

And FYI, the stock douchey reply is “what, just moved here from Ohio?”. Not Texas.

Meanwhile, Los Angeles is kicking our ass, not only in new subway lines constructed, but in the creativity of the designs, both below and above ground.