In an old Metro station in Paris, all covered in ads… 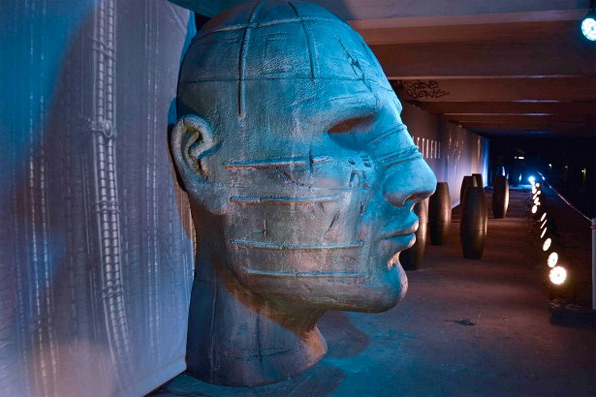 An ad campaign for the upcoming Prometheus movie has taken over a ghost station in the Paris Metro. (Via FirstShowing.net)

I grew up at 91st and Broadway, and for the city’s subway buffs, that intersection holds a special place in our hearts for it is the location of the one of the city’s abandoned subway stops. Once a local stop along the West Side IRT, the TA shuttered this station in 1959 when the southbound extension of 96th St. left 91st St. as an unnecessary relic of another age. While the Transit Museum once offered tours of the station, these days it is a dimly lit gallery for graffiti artists and history buffs who know where to look as the 1 travels between 86th and 96th Streets.

This station at 91st St. is hardly New York’s only abandoned platform still visible to the general public. Along the East Side, Worth St. and 18th St., both of which met a similar fate as 91st St., remain in place, covered by decades of neglect. The City Hall loop is visible for those who ride around the loop on the 6, and the Hoyt-Schermerhorn platforms are on full display for another waiting for an A, C or G train. Joe Brennan’s site has everything you’ve ever wanted to know about these abandoned stations and more.

The MTA has, now and then, debated what to do with these stations. Due to safety and liability concerns, they remain off limits to the general public, and a plan to turn City Hall into a Transit Museum annex were quashed by Mayor Giuliani over security concerns. Instead of anything, they are nothing but barely remembered parts of subway history. They could however find a second life with some creativity. 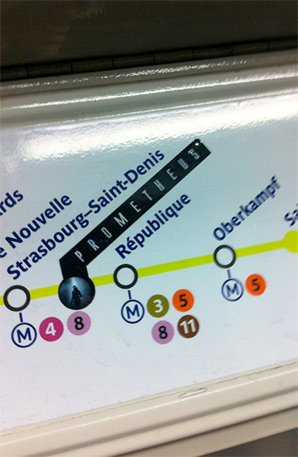 The ad campaign has taken out space on the Line 9 route maps in Paris.

New York’s isn’t the only subway system with abandoned stations. In Paris, in particular, the twists and turns of their tunnels are laden with ghost stations, and now in the City of Light, they’re putting these stations to use with a twist Madison Ave. would appreciate. Ridley Scott’s Prometheus is set to take the movie world by storm. A quasi-prequel to the Alien series, the film has a mythology all its own, and the viral marketing campaigns have been widespread and effective. As numerous movie sites reported this week, a new campaign has opened in the Saint-Martin station. Closed since just after World War II, this station now features giant heads and lighting straight out of the movie.

Fox has issued a press release promoting the use of this station as a blank slate for its advertising efforts. They discuss using the subterranean station to recreate movie sets. The curvature of the ceiling and the dim lighting are ideal for such a usage, and Paris Metro riders seem to love it. The studio has also paid Metro to slap the movie’s logos on strip maps in the Line 9 subway cars.

So let’s see it, New York. Our abandoned stations, not in the greatest of shape right now, could be great springboards for innovating in-tunnel advertising. Generally, the stations are located close enough to nearby stations that trains don’t go zooming past them. It’s always possible to spy 91st St. at a reasonable speed, for instance, and something creative in that space would certainly draw headlines and eyeballs.

On Thursday, I rode a shuttle fully wrapped in advertising for something in Switzerland. Even though I rode the same train twice in the span of an hour, I couldn’t tell you what I saw. But these Prometheus heads would stick with me. It’s a memorable use of an intriguing spot and a revenue opportunity worth pursuing.

After the jump, a viral video of the viral marketing in the Paris Metro.

I’d love to see this in NYC…but the graffiti-drawing scum would ruin it like they do everything else.

Paris has its own share of hoodlums. Not sure if they spray graffiti, but they jump turnstiles and nobody does anything. I think in a few days of visiting I saw more turnstile jumpers than in years of living in New York – and if not, the numbers were still close.

Paris has one of the most invigorating street art communities in the World. The probably have more graf than any American city. Of course there is more room for outlets so perhaps it doesn’t fall into vandalism quite as much. But on the opposite side, Paris pays a fortune to keep it’s city clean. They have far more employees working on streets and sanitation per capita than many other places.

I remember when some developers were looking into exploring the possibility of turning the 18th Street station into a club about 10 or so years back.

Do you know anything more about this? It seems like a great idea. Why’d it fall through?

Well the concept would’ve involved installing high grade sound proof glass from the floor to the ceiling at the platform so the trains could be seen going by from the establishment, but one of the logistical problems if I’m remembering this correctly would have been the exits. In case of fire/smoke the main exits would be to go upstairs with the general direction of the smoke for hundreds of people. So a below grade exit would be needed for evacuation but that would lead to the tracks unfortunately. Plus the establishment would need to provide a rodent free environment. Easier said than done right next to a subway tunnel in what would be an old station itself. Although the concept was great the cons started popping up and the developers dropped the bid for the project.

I just wanted to point out that we already have artwork at one of our abandoned stations, Bill Brand’s Masstransiscope. It’s paintings designed to look like animations in the former Myrtle Avenue station viewable from Manhattan Bound B/Q before they get on the Manhattan Bridge

One thing the subway’s got a lots of (no, not rats!, well yes, rat’s too!) is walls! Walls everywhere. And lots of people stare at them, knowingly or not, bleary-eyed in the morning, sleepy-eyed in the evening, and occassionally starry-eyed in between.

And after all these years of seeking additional revenue opportunity, these walls too, are staring the MTA in the face, blankly. So, I do not see, whether in an abandoned station or on some empty tunnel wall or a functioning station, why MTA cannot generate lots and lots of ad revenue.

If I were a wealthy man, I always wanted to buy one of our abandoned stations and turn it into my own personal cave of chillage. Put up a very secure one-way mirror and just sit there in a recliner sipping scotch watching the trains go by.

But, since when are they for sale?

They are always for sale. If Bill Gates offered $1 billion for one of them the MTA would do back flips from here to Victory Blvd and back! Everyone has a price even when they don’t offer the product for sale. Money can make anyone change their mind.

It’s a wonderful idea, but it already exists. The northbound platform of the Myrtle Avenue Station north of Dekalb Avenue is an art piece.

The 18th Street station would seem to have the best commercial options, because of it’s location on the southern edge of what’s considered midtown Manhattan, in the same way the 42nd Street shuttle is a favorite for the ad wraps because the buyers know it will always been within the high-trafficked/higher income areas (I’d actually like to see the restaurant idea revived, but that would probably have had a better chance of working if 18th had been built like Astor Place or 28th Street, with an underpass connecting the two platforms).

btw, the electric railroaders assn used also to run nostalgia trains, leaving from the south side shuttle platform (track 1) in grand central and running down onto the downtown lex tracks. the conductor was a fr cosgrove, the subway workers’ chaplain, who was also a priest in my parish.