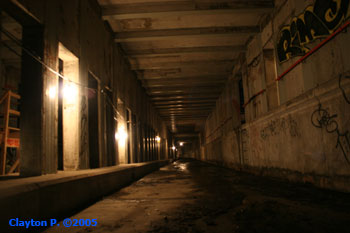 The LTV Squad took a tour of the Chinatown segment of the 1970s-era Second Ave. Subway a few years ago. (Photo via LTV Squad)

Every few years, some event, some stunt, some daredevil makes headlines that remind New Yorkers about the wealth of infrastructure, used or otherwise, that lies beneath the streets. No one knew about the South 4th Street subway shell until the Underbelly project came along, and few people remember various abandoned subway stations until they make the news.

The latest entry in this sporadic on abandoned infrastructure involves a topic near and dear to my heart: the Second Ave. Subway. At various stretches along the East Side, partially-built tunnel segments lie dormant beneath the streets. The sections north of 96th St. are due to become a part of Phase 2 of the project, but other portions built during the 1970s will remain forever devoid of trains. One such section spans a few blocks between Pell and Canal Sts. with an entrance portal just south of the Manhattan Bridge.

A gang of adventurers, explorers, trespassers — call them what you will — found the entrance and decided to host a party down there. Gothamist, in an intentionally meandering post, takes us along for the ride, and despite promises not to reveal the location and some sleight-of-hand attempts at misdirection, it’s clear that the party took place in the 1970s-era Second Ave. Subway tunnel.

No one, of course, is happy. The MTA has noted that trespassing is dangerous and illegal, and the NYPD are investigating. If the cops can’t keep limited-access abandoned infrastructure secure, one might wonder, how can they guard against attacks on the current subway system? Meanwhile, this isn’t the first time organizers thought they could publish photos of an illicit undertaking while keeping the location a secret, and this isn’t the first time it took Internet users a grand total of about 20 minutes to identify the location. Keeping a secret from those who enjoy and obsess over New York City’s infrastructure is all but impossible in an age of digital photography.

Many though are probably wondering about this stretch of subway tunnel. There are no tracks, and there are no stations. So what is it? For a video tour, check out Steve Duncan’s walk through the tunnel from early 2012. The tunnel itself was part of an $8.3 million (in 1973 money) contract for the lower portion of the Second Ave. Subway. At the time, before the city went broke, it tried to build the new route all at once, but this section was to run from Chatham Square to Canal Street. It’s unclear how much of the tunnel currently exists, but clearly enough is there to host around 150 people comfortably.

Interestingly, the tunnel itself won’t be a part of the current Second Ave. Subway project if it ever progresses to Phase 4. According to the Final Environmental Impact Statement, because of the alignment choices through Lower Manhattan, “it would not be possible to use the existing length of tunnel near Chatham Square for the subway operation because of the shift in the horizontal and vertical alignment. The existing tunnel segment could instead be used for ancillary facilities, such as a power substation or ventilation facility, adjacent to (and higher than) the subway tunnel.” Ultimately, then, the only way to see this space is to sneak in, but I wouldn’t recommend it.

While I agree with most of this overall, I think the conflation of securing an abandoned concrete shell in the ground frequented by next to nobody with an increased likelyhood of an attack on the subway is misguided. This should be a last priority, not a first. It’s akin to saying “if the City can’t keep that abandoned building secure, how can they guard against attacks in Times Square?” The NYPD & MTA have done a great job with security, mostly evidenced by the fact that there hasn’t been any attacks on the subway. The ability of people to access two unused sections of infrastructure shouldn’t be a huge concern
.

It’s almost a non-issue. The NYPD is probably just butthert that somebody dared to enjoy themselves without a permit.

Yes I agree. So this happened in an abandand tunnel? Big deal… you cant expect the NYPD to patrol every nook & cranny of the city. The NYPD prioritizes & focuses on the most importent locations & issues, or at least they should be doing so.

The idea was, when Confucius Plaza was being built, that the SAS couldn’t get from Chrystie Street to St. James Place in a relatively straight line without boring under buildings and off the street grid, so as long as the big apartment building was going in between Division Street and the Manny B, why not save some money and secure the ROW by running a subway tunnel through the basement?

Of course, back then, when the original tenants of the building moved in, they pretty much knew what they were getting into, had the 1970s effort to built the line been finished. If, miracle upon miracles, the MTA ever does get to Phase IV of the SAS, from Houston St. to Hanover Square, the NIMBY legal fight is going to be epic when they building’s then-current occupants find out the subway’s going to be rumbling right through their property 24/7/365 (think Yorkshire Townrs, but with the tracks and adjacent Chatham Square station replacing the kerfuffle over the exits on 86th Street).

But aren’t they saying that the revised plan for Phase 4 does NOT involve using that long-abandoned tunnel?

If they go deep tunnel on Chrystie they probably can’t use it. But at the same time, the fastest way between Chrystie and St. James Place is still directly under Confucius Plaza, whether it’s 30 or 80 feet underground. It would be interesting to read the city’s original building permit for the site, to see if allowing any subway tunnel under the building is required, and not just that specific subway tunnel.

Its close enough to street level that you could get down there without half a dozen escalators. Naturally, the MTA wont use it (though in the intervening 50 years before they get the SAS down there, they could change their minds)

Obviously there’s a demand to have “underground” parties, so why not just rent out the space through a private company and do it legally?

NYC real estate has gotten expensive enough now that the people are willing to pay, why not profit from it instead of trying to block it?

This is clearly an ideal location for a super villain lair. Think of Penguin’s hideaway (Batman Returns).