At Cortlandt St., awaiting the final part of the post-9/11 work 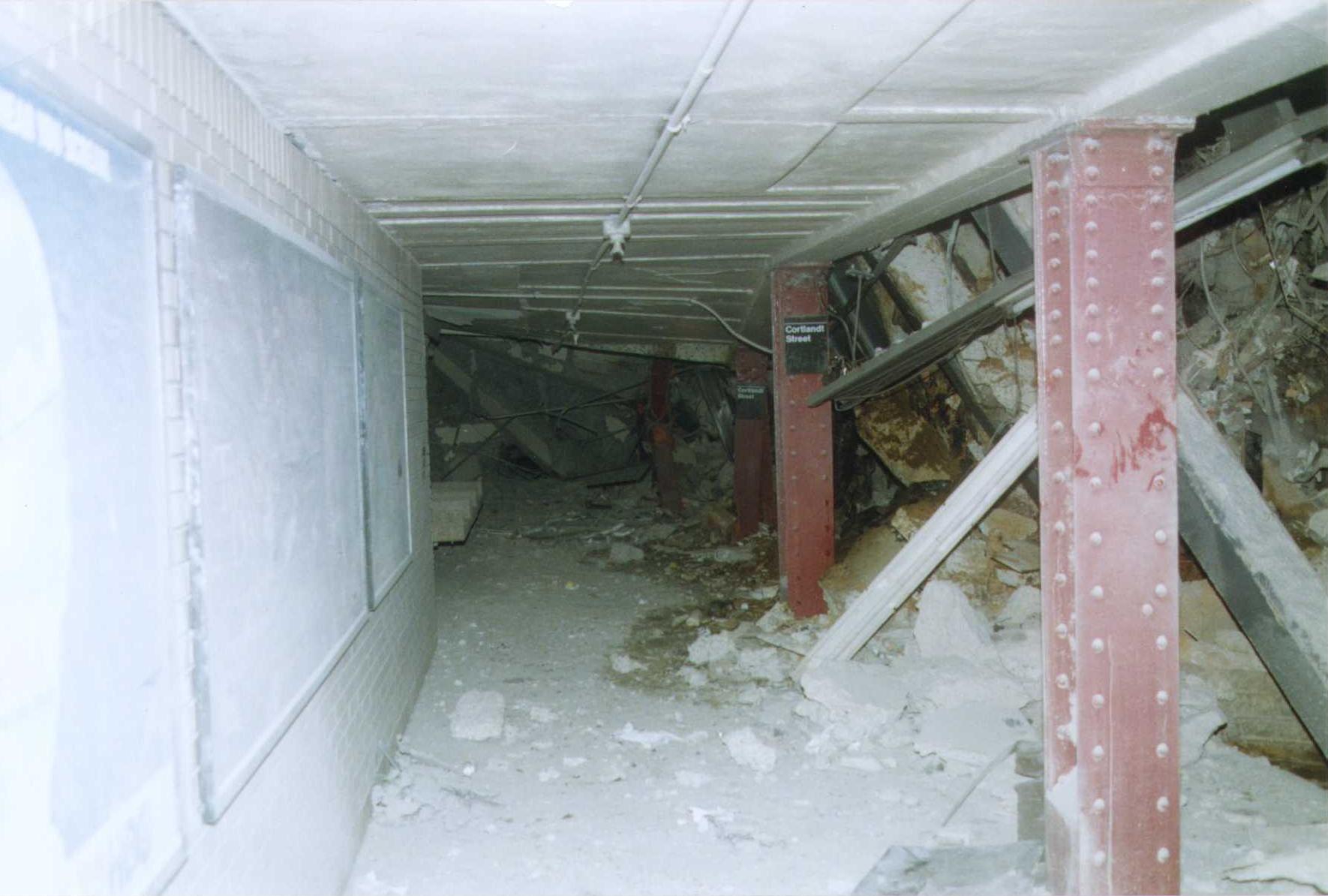 It’s hard to believe, but an entire generation of New Yorkers have come of age or come to a city without a Cortlandt St. subway station on the 1 train. For decades, Cortlandt St. fed Radio Row and then served as the West Side’s best access point to the World Trade Center. The station, though, was destroyed on September 11, 2001 and, as work has consumed Lower Manhattan over the past 14 years, it has remained closed since then. Based on recent MTA documents, it may still be a few years yet before the station reopens.

In this month’s Board materials, the immediate fate of the Cortlandt St. station makes an appearance, and no, the MTA isn’t considering keeping it closed. As buildings grow at the World Trade Center site, the 1 train’s pass through Lower Manhattan remains a key access point for thousands of West Side and Staten Island commuters who will need transit service to their offices.

The news concerns the MTA’s assumptions of a Port Authority contract for work at Cortlandt St. The details of the politicking are rather mundane. Essentially, Cortland St. had to remain closed while the Port Authority rebuild the Ground Zero site, but the MTA and Port Authority have struggled to coordinate work and finalize cost-sharing arrangements for the repair of the subway stop. A few years ago, the Port Authority issued an RFP a key construction contract with the work split into two phases. Judlau won the bid, but it’s been slow going.

Phase 1 was the easier part. It was a $20 million for structural and demolition work, and it’s nearly complete. Phase 2 was supposed to be around $69 million, and it included a variety of systems work and a complete station fit-out. Work hasn’t begun, and now the MTA is going to assume it from the Port Authority with an expanded scope, more dollars and a longer timeline. The Board’s Transit Committee will vote tomorrow.

In fiscal terms, the MTA will increase the Phase 2 work to a total of $100 million; the money is accounted for in the 2010-2014 and 2015-2019 capital plans. The bad news is that this contract is set to last 36 months now. It’s possible the station could be back in revenue service before Phase 2 wraps, but it seems likely that Cortlandt St. will remain closed for the time being. All in, the station won’t reopen until over 15 years after 9/11. For such a key link to the World Trade Center site, that’s a big gap in service that won’t be restored yet.

While the reports have said the new Cortlandt Street will be fully integrated into the new WTC complex in a way the original station was not, the fact that the MTA is ‘assuming’ the Port Authority’s contract for the work sounds as if there may be similar disconnect as 45 years ago, when the PA didn’t want 1 train riders to have easy access to the WTC complex, and the main entrance to the station ended up being the access at Vescey and Greenwich streets, built into the side of the elevated WTC plaza

(i.e — does the MTA’s contact allow it access to tie in the new station’s main fare control points to the Calatrava hub, or will the entrances again be shunted off to a place away from the WTC’s main traffic pattern and volume? It’s actually more of a question now, since the downtown fare access at Cortlandt no longer only goes to just Rector Street and South Ferry, but has the transfer connection to the R/N at Whitehall to continue on to Brooklyn.)

The old Cortland St station had an exit directly into the WTC mall:

…and on both platforms. But access inside the WTC complex were via high-exit turnstiles, as the video shows — If you wanted the main entrance to the station with the low turnstiles, you had to go out to Vescey Street to get to Cortlandt Street.

And I remember those days well. I have the handicapped half-fare, and at that time there were tokens and paper return tickets. THAT was what was so lousy about those “iron-maiden” high gates. You had to go, return ticket in hand, to the other entrance where there was a “token man” in the booth to let you in.

The PA has put off rebuilding Cortlandt Street so long that the MTA is doing it out of its own budget, even though the PA was supposed to do it?

You know, this is one reason the MTA never has enough money in its budget. Other agencies keep leaning on it to accept their responsibilities. (Consider the Department of Buildings, refusing to do its job with the buildings which were damaged near the Second Avenue Subway construction– so the MTA steps in and pays for it.)

Structural Ccnfiguration-wise in terms of transfers and access the station is already fully integrated with the WTC Hub. The only thing this contract entails is the finish work, MEP, etc.

36 MORE MONTHS?????? SON OF A….. They’ve been working on the platforms for a while now, what could POSSIBLY require 3 more years?!?! Look, forget the finishes, just cut a hole in the ceiling and stick a d**ned ladder in it and get to the tile when you have time.

Something further occurred to me.
WHY would the PA have wanted to make access difficult between the #1 and the inside of the original WTC? What about all the #1 riders (from uptown, the West Bronx and Staten Island) who must have been WORKING in the WTC?
The whole thing seems strange.

The Port Authority doesn’t install subway turnstiles. The MTA does.

The problem was the original street-level exits at Cortlandt Street were destroyed in 1968 when work began in earnest on the WTC complex, and as designed, the plaza level was kept even with Church Street, so that the WTC indoor concourse was actually at street level by the time it crossed over the 1 train at what had been Greenwich Street.

So when the PA built the indoor concourse, instead of building wide stairs at the spot where the old Cortlandt Street exit had been located, provisions were only made for a single, narrow stairway from each platform to connect up to the interior mall area near the PATH escalators. A new 24/7 entrance was then built at the far north end of the station, but access was only available by leaving the concourse and going out to Vescey Street. Pre-Metrocard , anyone inside the concourse without a token for the HEET wasn’t getting on the uptown 1 train through without a major detour outside.

18 years since Cortlandt Street was closed, and it still isn’t reopened. I guess Marc Mednick doesn’t care one bit, does he? He still earns $120,000 for slashing service, cutting fares, and urging people to ride bicycles.