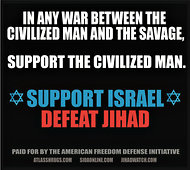 An MTA ban on demeaning advertising has been overturned by a federal judge.

On and off over the past two years, the MTA and Pamela Geller, head of a prominent anti-Islam organization, have squared off over bus ads. Geller wanted to run a series of placards on the outsides of buses that the MTA claimed violated its advertising policies, and although the MTA seeming faced a tall legal order, the agency turned down the ads anyway. Late last week, a federal judge ruled that effort unconstituional and enjoined the MTA from enforcing its advertising policy.

In a way, the outcome of this case preordained. Geller opted to try to buy bus placards because the Second Circuit had previously declared them to be designated public forums and thus subject to strict scrutiny and sweeping free speech protections. In a 35-page opinion [pdf], that’s exactly what District Judge Paul Engelmayer decided on Friday.

“MTA does not offer any justification for selectively allowing demeaning speech to appear on the exterior of its buses, let alone demonstrate that its content-based restriction on transit advertising is narrowly tailored to serve a compelling governmental interest, as is necessary to survive strict scrutiny,” he wrote. “Whatever weight might be assigned to the governmental interest in banning demeaning speech on the exterior of New York City buses on an even-handed basis, there is no good reason for protecting some individuals and groups, but not others, from such abuse. MTA’s nodemeaning standard, as currently formulated, is, therefore, inconsistent with the First Amendment.”

The MTA’s problem is one many government and quasi-government agencies face. How do you craft a policy that does not run afoul of the First Amendment when your advertising space spans various public spaces and audiences? The MTA, whose own internal guidelines prohibit ads that demean an individual’s or group’s “race, color, religion, national origin, ancestry, gender, age, disability or sexual orientation,” has not achieved this goal. “It is unavoidably clear that MTA’s nodemeaning standard differentiates based on the content of the proposed ad,” Engelmayer wrote. “Outside of these ‘specified disfavored topics,’ MTA’s standard permits all other demeaning ads.” Such a content-based determination violates the First Amendment.

So what happens next? Does Pam Geller run her ads calling all Muslims uncivilized savages on buses across the city? Not quite. Engelmayer stayed his decision for 30 days, and the MTA is currently assessing its advertising policy and whether or not it wishes to pursue an appeal. Meanwhile, the judge seemed to leave the MTA with something of an opening:

In holding today that MTA’s no-demeaning standard violates the First Amendment, the Court does not impugn in the slightest the motives of MTA and its officials—either those who put the standard into place or those who applied it to the AFDI Ad. Quite the contrary: From the testimony and evidence, it is apparent that, in promulgating and applying the no-demeaning standard, MTA has aspired to hold ads on public buses to a standard of civility. Its goal of preventing ads on city bus exteriors from being used as a medium for abuse and division in this diverse metropolis is entirely laudable. It appears likely that MTA drafted the standard in question with an eye toward the groups it felt most likely to be targeted by demeaning ads, without adequately considering the First Amendment implications under R.A.V. of such a selective prohibition…

Today’s ruling does not disable city authorities from adopting rules that hold ads and commentary on the exteriors of buses to a standard of civility. And in resolving this case on the narrow ground that the no-demeaning standard as currently drafted is impermissibly content-based, the Court pointedly does not reach any of the broader grounds for invalidation urged by AFDI under the First Amendment. Today’s ruling instead leaves—and is intended to leave—MTA the latitude to investigate and experiment with alternative mechanisms for using ad space on the exteriors of city buses productively, profitably, and constitutionally, while ensuring that this space is not used as a tool for disparagement and division.

And so that’s where we leave things. The MTA has been temporarily enjoined for enforcing its policy, and the case moves forward as the authority searches fo a constitutionally permissible standard and procedure.

Pam Geller… One of the right wing’s resident bigots. She is the one stirred everyone up about the not-a-mosque, Ground Zero Muslim Center that is not at Ground Zero and of which, nothing has happened. She hates government, but has no problem using public buses to get out her message of hate.

I do hope the MTA finds a way to stop her.

I’m Muslim and I say let them waste their money on this kind of thing if that’s what they want. I’m content spending my money on great post-fast Ramadan dinners and my MetroCard!

Exactly. She’s borrowing a page from extreme right parties in Europe, which say hateful things, get censored, and then shift the conversation toward their freedom of speech and how awful the elites are for not being sufficiently racist. Don’t let her do that; let her have to deal with public outrage and derision rather than with ad banning.

“She hates government, but has no problem using public buses to get out her message of hate.”

I know. I love the hypocrisy.

I hate when people try to americanize Nyc with bigotry and debasing binaries of us vs. them. She did the same thing with the WTC. Take all that shit to the south.

For those of us interested in philosophy conflicts, this does present an interesting dilemma though.

I don’t get why the MTA even has this issue. It’s not “free” speech in my mind, it’s paid advertising. MTA isnt a public forum, in this case it’s just a moving billboard. Are billboard companies required to post all ads? I don’t get it.

Exactly. I don’t think the MTA has any legal requirement to accept any advertisement. However, where they could run into issues is if they accept advertising from one side and not the other.

In various conservative towns, the bus agencies’ response to atheist ads has been to ban all political and religious messages, which is constitutional since it affects all political speech equally.

Go ahead and post them. Just don’t be surprised when the (sane) public does their thing on them. Pissed on, slashed posters of bigotry all around the city…

Well, the court ruling basically allows the MTA to set up rules for what constitutes the bus ad sign equivalent of shouting fire in a crowded theater, which permits them to temper, if not prohibit Geller’s message outright. But as with virtually all of her work, Pam’s message is in large part about promoting Pam as much as it is for showing support for Israel or attacking Islam — if in the end the more tepid bus ads fail to gin up the desired press coverage, Geller will look for some other more effective controversy to get her name out in the public.

This is all a bit confusing. What does this actually mean? Will MTA have to post the ads or not? I don’t see why they should have to. Geller is entitled to free speech but the MTA isn’t required to help her.

A bit off-topic, but has everybody here seen THIS piece on the Times site?

I have. I’ll be writing it up tonight.

TO BEN, On another point, do have any news to give us about a few projects which the media have been completely silent about?

If I haven’t written about them lately, there’s nothing new to report. The last B-Way/Lafayette update was a few weeks ago and still no opening date.

Is Jihad a racist word, I thought it ment Holy War? Does it demean a specific nationality or religion.

In this context, it is. Although the word has been used metaphorically, in this case the use is literal toward Islam. The bigotry is the combination of “Defeat Jihad” and “war between the civilized man and the savage.”

The Jihad bit, sans the “Savage” part, is no different from how in non-Christian countries, the bigots will accuse political opponents of being complicit in “The Christian missions.” (It’s quite common in Israel; an extreme right legislator recently staged a photo-op in which he tore up a copy of the New Testament sent to him by a Christian group.)

[…] much litigation over the past few years as Geller’s American Freedom Defense Initiative group successfully sued the MTA over its advertising practices. After Geller won her case on First Amendment grounds, the same […]