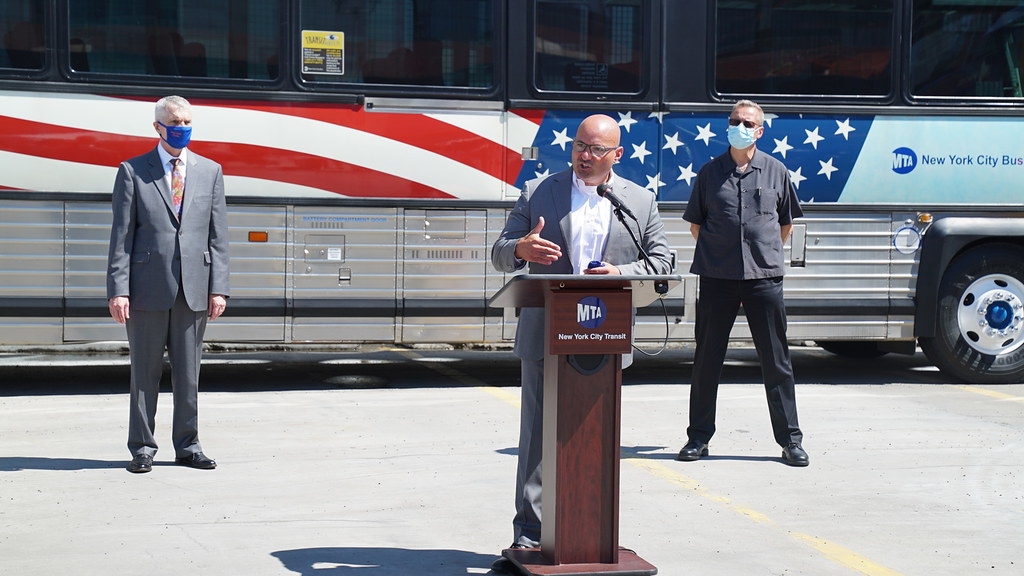 My friend Marcia Herold tends bar at the Greenwich Street Tavern in Tribeca, and as with so many of New York City’s service workers, 2020 has been a tough year. Her bar was closed for much of the spring, and it has reopened only as much as any of the city’s thousands of restaurants and bars have — with outdoor service only and hours scaled back to 11 p.m. For a place that used to serve food and drinks late into the night, the Greenwich Street Tavern is just trying to survive through the pandemic.

For years, Marcia, who lives in Boerum Hill, never had to think twice about getting home. Even on nights when the bar would close late, Marcia could easily jump onto the subway and be home quickly, but these days the trip is more complicated. By the time Marcia wraps up service and she and her co-workers finish cleaning, catching that last train back to Brooklyn is no sure thing. Sometimes she’s make it; more often, she doesn’t.

A few weeks ago, she waited on the platform for a train that wasn’t going to show up, and the MTA worker keeping an eye on things never told her the train wasn’t coming. More recently, she and a co-worker split a cab back to Brooklyn after missing the last train, but her co-worker, who couldn’t right now afford the cab fare all the way back home, had to get all the way to East New York. It’s usually just a 20-minute ride on the 3 or 4 train but can take 45 minutes or longer via a bus or two.

This is the current reality for around 15,000 New Yorkers who need late-night train service to get to and from their jobs but have found passenger service shutting down as early as 12:30. And yet, as New York City struggles to return to any semblance of normalcy, there is no end in sight to the MTA’s overnight passenger shutdown. Imposed in early May under the guise of “disinfecting,” by all accounts from multiple MTA and New York State sources, the shutdown was the brainchild of Gov. Andrew Cuomo in response to multiple news stories concerning homeless New Yorkers inundating an empty subway system. Instead of attempting to address the root causes of homelessness in New York, Cuomo ordered the state agency in charge of operating the city’s subways to shut down service, foisting the problem onto the city’s streets, and promoted the idea that the subways have to shut down for cleaning.

The MTA has added a few Night Bus-like buses on some key subway routes and had been paying for a handful of taxi rides every night. But their response to decreased overnight demand has been to tell essential workers trying to get home to just take local buses. For some, that’s a three-bus, multi-hour trip. For others, the trip home is a long walk or a nightly taxi ride few can afford. Meanwhile, the trains aren’t actually stopped. They run all night, on the same sparse schedule as before, but without passengers. The MTA’s disinfecting efforts — largely sanitation theater based on what we know about transmission paths for COVID-19 — continue with or without train service, and no one at the MTA has answered the two questions I have continued to post regarding the overnight shutdown:

Each time I think the issue could be coming to a head, the Governor puts a stop to any speculation. State Senator Brad Hoylman has proposed legislation requiring the MTA to provide 24/7 subway service but only “after a declared end to the COVID-19 pandemic,” as he said in his statement. With no end in sight to the pandemic, that bill is largely meaningless right now. We’re in a state of emergency, and the governor can do whatever he wants.

When pressed on the issue earlier this week, the governor punted. The MTA has recently announced that due to low usage and a high cost amidst an existential budget crisis, the Essential Connector cab service would be suspended. The agency had reported only around 1500 riders per night and a cost of $49 a ride on average. The last night of for-hire vehicle rides will be August 30, and on August 31st, the MTA will reinstitute fare collection on local buses. Since the early days of the pandemic, local buses had been free to protect bus drivers, but the MTA cannot afford to give away rides right now. The agency has built barriers to protect drivers and is upgrading filtration systems on all of its buses to go along with the fares the agency says it must collect.

But what about that overnight subway service? The MTA can’t afford anything right now, but it can continue to afford running empty trains all night. When asked about these recent moves, the governor this week said of 24/7 service, “You’ll have to ask the MTA.” The MTA bounced it back to another state agency. When pressed by reporters, Pat Foye, increasingly annoyed with the question, said, “As we’ve said, while the pandemic continues, the 1 a.m. to 5 a.m. closure will continue. The state commissioner of health will determine the continuation of the pandemic. We’re not in the public health business. The commissioner of health will opine on the continuation of the pandemic.” While Foye tried to claim the overnight shutdown allows the MTA to be more productive, when asked, Foye could not name a single project outside of the L train work on an accelerated schedule thanks to the pandemic shutdown. It all just rings hollow as it impacts the lives of thousands.

This is, of course, a classic case of political hot potato. The MTA, under orders from the governor, shut down the overnight service but won’t say when it will restart, and the governor, who controls the MTA, wants nothing to do with the question. So we’re stuck. We’re stuck with buses that cost the same as the subway but cannot provide the same long-distance service and relatively fast travel times the subway can generally guarantee. We’re stuck watching workers like Marcia struggle to get home after their jobs each night, and we’re stuck in limbo with businesses trying to hang on while the state and city stack the decks against them. Few local politicians are speaking out, and few are fighting for the transportation needs of a New York City just trying to hang on for a few more weeks and months. The pandemic continues, and that’s all the cover the MTA and Andrew Cuomo need right now.

¡No entiendo! The night trains are still running, but no passengers on board?

I think that this situation is TRULY SHAMEFUL. Every time that I asked to MTA officials to restore the 24/7 subway service, they said me that it was a CUOMO DECISION. Now Cuomo says that it is a MTA decision…TO STOP these poor liars!!!

A simlpe question for Foye and Feinberg: why the EL CTA Chicago, Patco Philadelphia, SIR NY Staten Island, PATH NY/NJ and LIRR in USA, but also S Bahn Frankfurt, S Bahn Koln, S Bahn Hanover haven’t stopped their 24/7 service and also the Metro Copenhagen, after a short break, is 24/7 again, while the CITY THAT NEVER SLEEPS since May 6 hasn’t a late night subway service after 116 years, but even after 139 years also counting the old Manhattan Railway(Elevated) Company which started the 24/7 service in 1881?

No more stupid excuse about the homeless and cleanliness!!!
It should be the stupidies thing in the world: to punish over 100.000 riders that every weeknight (1-5AM) take the subway since 1904 for some poor homeless. Ridicolous and ABSOLUTELY wrong. To stop Trump, but to stop also this delusional Cuomo…..That enough. NY is a 24/7 city!!
Are the trains cleaner? Is it ABSOLUTELY normal. The actual ridership is 10%-15% compared to the normal ridership…….It is only a stupid propaganda!!!!

Even Robert Kelly, the Chairman of the Stations Department in the TWU Local 100 calls the overnight shutdown “ridiculous” and TWU Local 100 President Tony Utano says he thinks MTA employees and management can sit down and plan to restore service and stop relying on private contractors to clean the system overnight.
NYC Transit head of buses has said that bus service cannot replace the subway.
And in the next days there will be also the end of the “Essential Connector” late-night taxi service…….
The night workers can’t pay 50$ every night for a taxi!
In NYC, unlike the other cities, over 50% of the people hasn’t got a car.
And we have a regular overnight subway service, but without riders….Ridicolous!! And the gyms will open again…..

But Foye and Mta ALWAYS SAID that the decision to restore the 24/7 subway service it’s up to Cuomo. Now Cuomo says that it is a MTA DECISION…. We NEED the 24/7 subway service. Shame!!!
P:S. I noted another GREAT LIE of Foye in your article. He says that the overnight shutdown allows the MTA to be more productive and he claims just one example: the L tunnel work. It is an ENORMOUS LIE!!! In fact the MTA (thanks to Cuomo….yes Cuomo….) NEVER STOPPED the 24/7 service on the L line, by using a single track!! Against these liars, it is NECESSARY more attention of the journalists.

This vine sprouts from the seed of the ACLU campaign to deligitimize public order. A: End civil commitment of the insane, so that now you can only be moved to the looney bin after you’ve made headlines. B:Agitated to strike down all laws against vagrancy, and unfair-sounding statute that was put into place by people with an experience and understanding of reality, and repealed by those who prefer to live in theory.

If it’s up to the governor. We need a new governor. Cuomo, we are done with your insensitive bull sheet. I will never vote for you again. We don’t care about the boyfriend. We care about our lives you put in danger With this charade. I have stood at a bus stop until 4;30 in the morning while bus drivers passed me by. I have been stalked. And I am exhausted from it taking all night to get home. I want a new governor.

The real problem to me is Cuomo does NOT want a repeat of what happened in March when an arsonist started a fire in the overnight hours causing the death of a train operator that was first blamed on the homeless. That, coupled with what at the time was a serious homeless problem on the subways is why I suspect until there is a way to get the homeless off the subways LEGALLY other than shutting down the system that is ACLU-proof, this will continue.

Adding to what I wrote above:

I suspect Cuomo is afraid of something similar to what happened in March happening if the subway reopens in the overnight and Cuomo winds up “primaried” in the 2022 election because of it. I suspect Cuomo fears either Cynthia Nixon, Hillary or even AOC would run against him in 2022 and needs the status quo to remain with the subways until then unless pressured by Wall Street to reopen such.