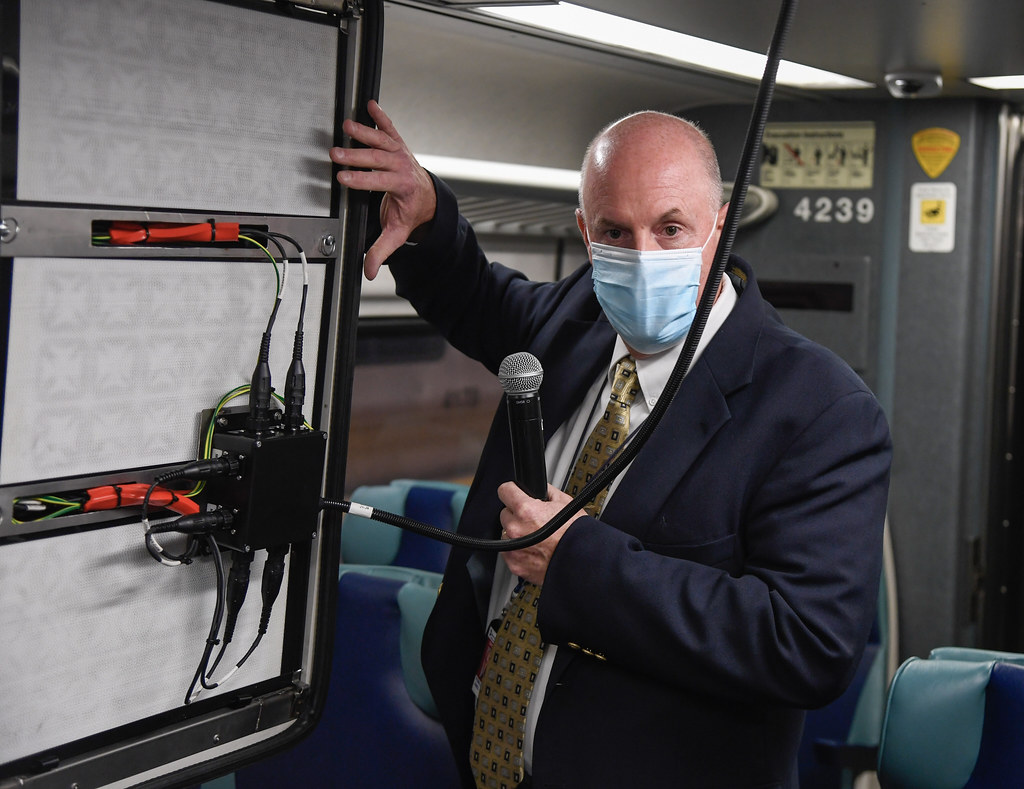 While the world has yet to find a link between transit and coronavirus transmission, in the age of COVID-19, transit agencies themselves are working hard to build up public trust in buses and trains. For New York, masks were an early and easy focus, and compliance remains high across the region. In fact, a 6 train car of around 35 passengers I was on this past Saturday afternoon had universal compliance. Now, as the long-term effects of the virus settle in, ventilation has become the next frontier.

As the world has learned more about COVID-19, we have come to understand that ventilation and air replacement are keys for reducing transmission risks in enclosed spaces. Generally, train cars are very efficient at air replacement. The MTA’s commuter rails, for example, filters air 30 times an hour or once every 120 seconds, far in excess of CDC guidelines, and the air in New York City’s subway cars is fully replaced every 200 seconds. Now, the MTA is piloting a new way to filter and purify air, and if successful, the agency claims these new units could kill 99.9998 percent of virus particles, further enhancing transit safety.

The pilot launched last week on one car of Metro-North’s M7 rolling stock and will soon begin on one Long Island Rail Road car as well. It builds on a proof of concept launched over the summer that uses an electrical field to generate a wave of ionized particles that destroy airborne viruses, bacteria and particulate matter. The U.S. Environmental Protection Agency will also test this new technology to determine if it can be useful around the country.

“As more and more customers return to Metro-North trains, they want to be confident that we are doing everything that we can to keep them safe and healthy,” Metro-North Railroad President Catherine Rinaldi said at a press conference last week. “If the pilot proves successful, not only does this new air purification technology kill COVID-19, it kills any virus including the standard flu or bacteria that cause the common cold, and even particulate matter like diesel fumes. The benefits provided by this new system would last well after the pandemic has ended.”

The new system passes air through three stages. The first stage applies an electrostatic discharge to actively target viruses, and then uses physical filtration to remove the charged particles. The air is then safely exposed within a self-contained unit, to ultraviolet radiation that has long been proven to kill bacteria, mold, and viruses. Third, the air is exposed to a wave of ionized particles that attack pollutants, chemically decomposing them. The ions further travel deeply through the air distribution ducts of the car and into the vehicle interior to enhance the railroads’ existing disinfection of surfaces inside the cars.

MTA officials did not talk about any potential benchmarks for the pilot program other than “effectiveness” and will use the time to assess how quickly this system could be installed on each of the 2200 cars Metro-North and the LIRR couldn’t employ. These officials noted, however, that since Knorr and Merak created the train’s ventilation systems, it can be treated essentially as an add-on. “This addition to our ventilation would be completely invisible to the customers,” Metro-North Chief Mechanical Officer James Heimbuecher said. “We like that it can be incorporated into our existing ventilation systems with minimal intrusion. If this pilot proves successful, our crews are ready to begin adding this system across our entire fleet.”

Ventilation is clearly the current focus as the world hopes to return to some semblance of normal before any potential COVID-19 vaccine arrives, and this pilot gets the commuter rails — where ridership has lagged in recent months — on the right track. Could something like this come to the subway? It’s an intriguing possibility and one I’ll follow up on. Politically, though, there’s a rub.

Last week, the FRA put out a call for the nation’s transit agencies to apply for some or all of a $10 million grant to research COVID-19 (PDF). The goal of the grant is to encourage agencies to “develop, deploy, and demonstrate innovative solutions that improve the operational efficiency of transit agencies…in four major areas: (1) Vehicle, facility, equipment and infrastructure cleaning and disinfection; (2) exposure mitigation measures; (3) innovative mobility such as contactless payments; and (4) measures that strengthen public confidence in transit.”

This sounds right up the MTA’s alley. It is, after all, the largest transit agency in the nation and has been aggressive in testing a variety of approaching to disinfecting train cars through UV light and improving ventilation, as this new pilot demonstrates. But the MTA may not be eligible to apply for this grant. Following the Trump Administration’s political decision to label New York City an “anarchy jurisdiction,” the FRA has said they will consider this designation in determining which transit agencies can receive these grants.

The FRA is the first federal agency to make such a statement, and transit advocate organizations are not happy. NACTO sent out an aggressive statement opposing the move:

Denying transit agencies funding obstructs their ability to develop best practices to make transit safer for millions of riders and workers, and the people with whom they interact. The Metropolitan Transportation Authority in New York, TriMet in Portland, and King County Metro and Sound Transit in Seattle together make up nearly half of national transit ridership and have already made major contributions to our understanding of how to keep riders and operators safe from the virus. From testing vehicle filtration and UV light sanitation systems to instituting mask outreach and mandates, the ability of these larger, urban transit systems to evaluate new interventions is especially instructive for operators serving smaller, rural communities where Covid-19 outbreaks are currently most acute and resources are limited.

The Trump administration’s attempt to condition FTA grants on political criteria unrelated to need or merit sets a disturbing precedent. If applied to other forms of federal funding, this “guidance” has the potential to thwart cities’ long-term economic recovery efforts. Cities and transit agencies need a strong federal partner to maintain and restore service, invigorate local economies, and create new jobs.

Withholding federal funding from cities in retaliation for political disagreements is not only legally dubious but vindictive and undemocratic in its intent. Our organizations, representing cities, transit agencies, and transportation experts and advocates, stand in firm opposition to the Justice Department’s designation of New York, Portland, and Seattle as “anarchist jurisdictions” and against the arbitrary and capricious decision to deny some of the world’s most-used transit systems acutely-needed funding solely to serve a political agenda.

Close to home, Transit Center’s David Bragdon echoed these sentiments. “Secretary Elaine Chao’s willingness to expose innocent transit riders and essential transit workers to greater risk of COVID just because of Donald Trump’s unrelated personal vendetta against certain local elected officials is both reckless and un-American. No American, in any city or state, should be sacrificed to a pandemic because of a President’s petty whims,” he said.

The FRA later told Streetsblog New York that the agency had no choice but to follow Trump’s guidance. The MTA meanwhile is “reviewing” the grant application, and the de Blasio administration has threatened to sue if funds are denied. The election could render this all moot in a few days, but for now, at least, studying and enhancing transit disinfectant procedures during a pandemic remains hijacked by the same politics gripping the nation even as the MTA moves ahead with its own clean-air initiative.

Facing a $6 billion deficit in 2021, MTA could cut subway, bus service by 40%. But is this a real threat or simply a political one?

The whole political stance by our demented criminal & chief is unproductive & doesn’t aid in solving the crisis that he was warned about & chose to downplay. Give the MTA credit for following the science & coming up with a series of creative solutions in a few months that will pay dividends for decades to come.

It is an embarrassment to current and former Federal Transit Administration employees including myself, that potential discretionary transit aid would be held up. Public transportation funding has nothing to do with the civil disobedience, burning of buildings, rioting or looting that took place in Seattle, Portland and NYC. It would be insane to hold up future $1.5 billion in various FTA formula programs that the MTA will count on in federal fiscal year 2021 (October 1, 2020 – September 30, 2021). Support for mass transit, be it urban, suburban or rural is bipartisan. There is virtually no Congressional District that doesn’t have a number of public transit agencies and services. I can’t imagine that there is one member of Congress or Senate who supports this FTA policy. Trust me, at the end of the day it will not be enforced.

Larry Penner — transportation advocate, historian and writer who previously worked for the Federal Transit Administration Region 2 NY Office. This included the review, approval and oversight for billions of dollars in grants to the MTA which funded LIRR, Metro North, NYC Transit, MTA Bus capital projects and programs along with 30 other transit operators in NY & NJ) .

“It is an embarrassment to current and former Federal Transit Administration employees including myself, that potential discretionary transit aid would be held up. Public transportation funding has nothing to do with the civil disobedience, burning of buildings, rioting or looting that took place in Seattle, Portland and NYC.”

Of corse not. It’s to punish areas of the country who didn’t support the dictator with their votes.

Well, tell the DA not to release thug antifa douches without bail, and maybe they’ll get their FRA money.

And don’t think sniffy and kneepads will be in power on 1/21. Good luck with that.