In Their Own Words: The (fourth) Second Ave. groundbreaking ceremony 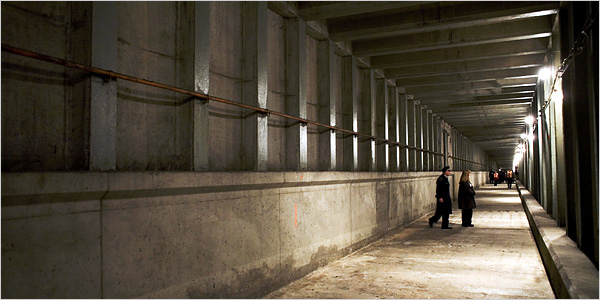 Dignitaries head to a groundbreaking inside the tunnel for which ground was supposed to be broken. Or something like that. (Jeremy M. Lange for The New York Times).

So is it still a groundbreaking ceremony on the fourth try? Should we celebrate and pat ourselves in the back? Well, of course, we should! This is New York. This city lives on glitz and self-congratulatory ceremonies.

In other news, today was the groundbreaking ceremony for the fourth attempt at building the Second Ave. subway. If you haven’t already read about this here, here, here or here, well, then all of this is new to you. (If you’ve already read about it, just pretend, ok? Make me feel good. And check back later for some pictures of planned station entrances.)

So on a rainy Thursday morning, a veritable Who’s Who of New York politics marched their way downstairs to a tunnel that has sat largely abandoned for thirty years to kick off what should be the first successful attempt to build the Second Ave. subway. The politicians patted each other on their respective backs and promised Big Things to Come for the residents of the East Side who will, in MTA time, soon be enjoying a new subway line.

The MTA bigwigs certainly were proud of themselves. “This time it’s for real. At long last, we will build the Second Avenue Subway,” said MTA Executive Director and CEO Elliot “Lee” Sander. “Second Avenue is the most important mass transit project in the United States. It is critical to support the region’s economic growth and environmental health for the next generation.”

“Today’s groundbreaking is a salute to the many people who have fought for the Second Avenue Subway over the years,” said at-some-point-outgoing MTA Chairman Peter S. Kalikow. “This day was hard to imagine ten or twenty years ago, but the start of this project highlights the rebirth of the region and the resilience of the great State and City of New York.”

Never before have so many politicians said so much and yet so little. These quotations, as provided by the MTA’s press shop, illuminate the pageantry and shallowness behind a groundbreaking ceremony.

Let’s start with Mayor Mike’s double negative. We need to grow capacity and improve service to meet the challenges of the future and get people out of cars and onto mass transit. This is an investment in our future that we can’t afford not to make,” Bloomberg said.

And then there’s wishful thinking from Manhattan Borough President Scott Stringer. “It’s been a long time coming,” he said, “but we are now finally on the right track for good. The Second Avenue Subway will bring unparalleled economic and quality of life benefits to Manhattanites and will ensure the economic competitiveness of our metropolitan region for decades to come.”

Pay no attention to the skyrocketing real estate values along the Far East Side from the Lower East Side through Alphabet City, Murray Hill, the Upper East Side and East Harlem. Sure, the Second Ave. subway will bring a much-needed subway line to the East Side, but no part of Manhattan will be affordable anymore. Rents will rise precipitously as these hard-to-reach areas of the city become accessible. Anyone thinking that part of this project through?

Governor Spitzer, ever the academic, had an wordy quote for the occasion. “After decades of delay, the construction of the Second Avenue Subway is the type of bold investment required to broaden the city’s diverse infrastructure and, in turn, adds the capacity necessary to support New York City’s continued population and economic growth,” he opined. “Just as the construction of New York’s original subway facilitated the historic development of the city at the turn of the last century, the Second Avenue Subway will further open up parts of the city to new economic development.”

And finally, our senior Senator and recent Democratic hero Chuck Schumer had the best line of the afternoon, discussing how people on the East Side currently have to walk uphill both ways with no shoes on to reach the cattle-car-like Lexington Ave. line. “For far too long, millions of New Yorkers have had to walk a country mile only to squeeze into crowded Lexington Avenue trains. Finally, thanks to a full heaping of federal dollars to start and sustain the Second Avenue Subway, New York will have a world class new line that will boost our economy, alleviate the most crowded line in the nation and improve the lives of New Yorkers for generations to come,” he said.

Have you ever seen the rain, coming down in the subway?